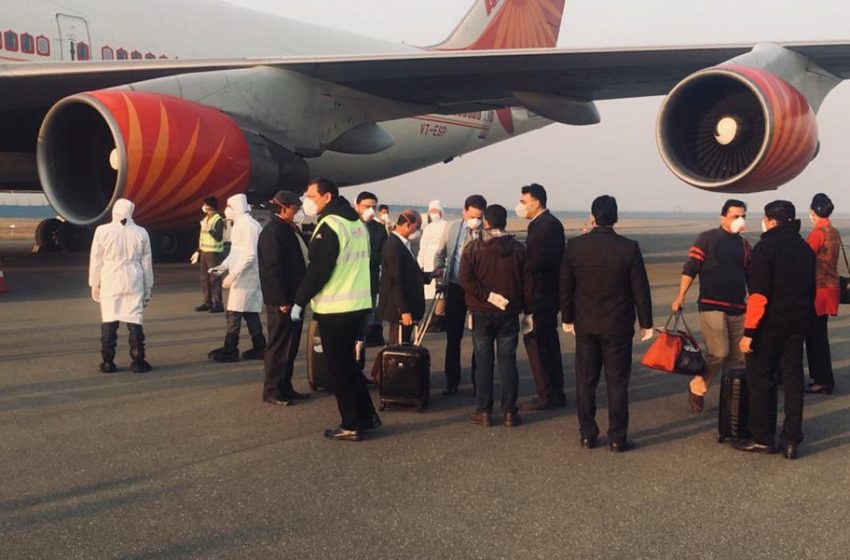 The first batch of 324 Indian nationals evacuated from China due to the Coronavirus outbreak landed in New Delhi on February 1. (Photo: @VikramMisri)

NEW DELHI: Veterans of the Indian Foreign Service will recall the evacuation of over 100,000 Indians from Jordan in 1990 in the wake of Saddam Hussein’s invasion of Kuwait. Compared to that, the evacuation of 647 Indian students (and seven Maldivians) from China was a smaller operation but those involved risked infection, possibly even death.

But the more immediate problem the Indian embassy faced was Beijing’s evident discomfort with any evacuation, not least the loss of face. “They were not keen that people should leave and they needed some convincing to give clearances for the airlifts. They even suggested that Indians could consider staying on,” sources told StratNews Global.

But the mood in Delhi was clear: our people would be brought back home (those who wanted to return that is) and the Chinese were persuaded. Sources said most of the Indians were students based in Hubei’s capital city of Wuhan, the epicentre of the Coronavirus outbreak. But there were other Indians too, scattered in four cities across Hubei province, all desperate to return home.

The challenges were obvious: a highly contagious disease, as a consequence of which Wuhan and other regions in Hubei had been locked down to check the spread of the virus. This, therefore, precluded the possibility of a team of Indian embassy officials flying down to Ground Zero to coordinate the logistics for the airlift. Wuhan airport itself was closed and its staff sent home.

India does not have a consulate in Wuhan, which meant the entire evacuation effort had to be coordinated from the Indian embassy in Beijing, a little over 1,000 km away, via phones and emails. Sources said the evacuation effort needed to be quick given the “fragile mental state” of the Indians in Wuhan. Some were angry, others agitated as they feared they might be left behind, said sources.

“It was a unique and unprecedented situation. While those in the foreign service are accustomed to handling contingencies, this was an unusual situation as we could not access the area. Besides, those who needed to be evacuated were in different cities and there was no public transport available for them to travel to Wuhan from where the airlift was to happen,” said diplomatic sources.

The first task for the embassy was to collate a list of Indians in Wuhan and other cities. Since it’s not mandatory for Indians abroad to register with the embassy, the country’s outposts abroad don’t normally have their coordinates. What helped was the fact that the embassy was in regular touch with the universities and had a fair idea of the numbers they were dealing with.

“But we still had to establish contact with them and inform them about the developing situation and this posed a huge communication challenge,” said diplomatic sources.
Beginning January 23, the embassy set up a control room with hotlines that worked round-the-clock with 25 members of the embassy team. An email id through which Indian community members could contact the embassy was also created. A WeChat group (WeChat is a Chinese multipurpose messaging app) was also set up to communicate with Indians in Hubei.

Most of the Indians in Hubei were students studying medicine and largely belonged to the southern Indian states of Andhra Pradesh, Tamil Nadu and Kerala. There were also Indian professionals. “We swiftly built a database of Indians in Hubei,” said diplomatic sources. Not all wanted to leave and the Indian embassy estimates that between 70 and 90 Indians chose to stay on.

The embassy set up teams for different tasks—from manning the control room to coordinating with transport companies and Air India, from seeking permission from the Chinese foreign ministry, the provincial authorities in Hubei and the Wuhan city government.

“It was about getting permissions all along. And we had to make sure the information and permissions were being communicated from the Chinese foreign ministry at both at the provincial and city level,” said diplomatic sources.

As the names trickled in, the embassy realised that it would need at least two airlifts via a Boeing 747 aircraft to ferry the Indians back home. But before the flights could take off, an even more daunting task had to be accomplished. How do you transport scores of people scattered across different cities, all in lock-down mode? With public transport off the roads and people ordered to stay indoors, there were simply no trains or buses available for the students and others to hop onto and reach Wuhan. Besides, one needed permission from the Chinese authorities to even step out of quarantine.

Also, would transport companies be willing to move people from various cities in Hubei into Wuhan at the risk of their staff contracting the Coronavirus? And even if they were, would they be granted permission to move given the enormity of the outbreak and Chinese efforts to check its spread by imposing a lock-down?

The transport companies agreed to ferry people provided they had permission from Chinese authorities. Thus began efforts to seek permission from the authorities. And who would coordinate the embassy’s efforts and paperwork at Wuhan airport? The task fell upon two embassy officials, Second Secretary Deepak Padmakumar and M. Balakrishnan. They flew down to Wuhan to help with the airlift and are currently in quarantine in Delhi.

The first Air India flight carrying 324 Indians from Wuhan took off after these people were collected from 40 different locations and the flight landed in Delhi on February 1. The tougher part was picking up Indians from a dozen places outside Wuhan, some over 500 km away and transporting them through deserted highways. Some roads had been dug up or closed so the drivers needed to take a detour. But eventually, they all made it to Wuhan and were in New Delhi on February 2.