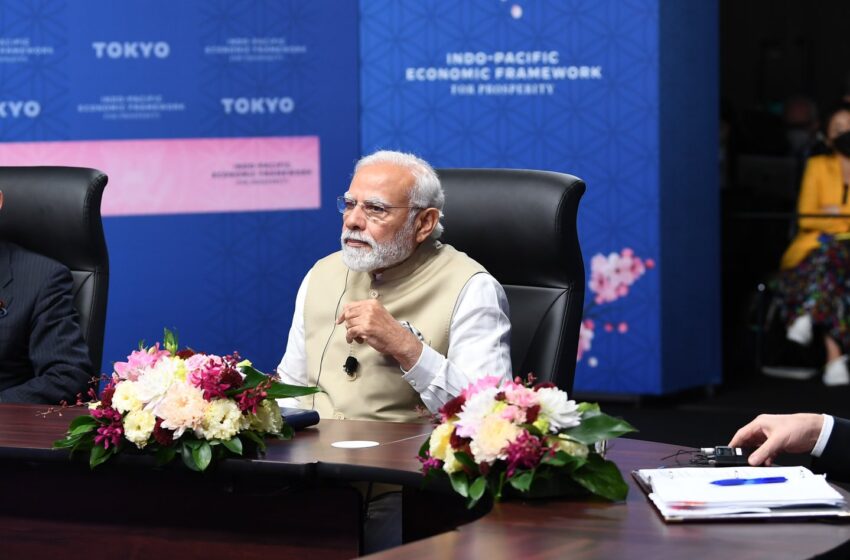 NEW DELHI: There’s a new wannabe trading alternative in the Indo-Pacific but it modestly styles itself as an economic framework and its proponents in Washington have made it clear that it’s not about free trade or lower tariffs or even market access.

But the reading among diplomats and trade specialists in New Delhi is that Indo-Pacific Economic Framework for Prosperity, which was launched on the first day of the Quad Summit in Tokyo on Monday, is only a first step. It’s about establishing a framework of cooperation between “like minded countries” and India is key here given the size of its market.

As President Biden noted, the framework “would provide a commitment to working with our close friends and partners in the region on challenges that matter most to ensuring economic competitiveness in the 21st century.”

Left unsaid was Biden’s determination to demolish the widespread impression that the US is a waning power and is distancing itself from the Indo Pacific. This is about countering China, something the region will applaud although they will be cautious about it.

Supporting the launch of the framework were Quad partners Australia and Japan, New Zealand and seven of 10 Asean countries. That the US is deadly serious is evident from the presence of its allies with formal negotiations kicking off on Tuesday.

Trade specialists like Biswajit Dhar of Jawaharlal Nehru University, believe the focus will be on “regulatory issues or coherence”, the idea being to bring greater harmony and coherence in the prevailing regulatory structures among the potential members. This coherence could cover everything from the digital to environment and manufacturing. He also believes President Biden will want to fast track these negotiations.

India supporting the initiative is interesting. Diplomats say South Block may have felt a need to mend fences with Washington after refusing to condemn Russia for invading Ukraine. In that sense, its move was driven by reasons of geopolitics. And while it will join negotiations on the Indo Pacific Economic Framework for Prosperity, it is also bracing for the inevitable pressure to follow on opening up its markets.

Prime Minister Modi gave no hint of this when he said, “I believe that there should be three main pillars of resilient supply chains: Trust, Transparency and Timeliness. I am confident that this framework will help strengthen these three pillars, and pave the way for development, peace and prosperity in the Indo-Pacific region.”

Predictably, Beijing has responded with Chinese foreign minister Wang Yi accusing Washington of looking to “sow discord in the region by looking to gang up with ‘small circles’ and change China’s neighbourhood environment.” He accused the US of “weaponising, and ideologising economic issues and using economic means to coerce regional countries to choose sides between China and the U.S.”

Despite Beijing’s rhetoric, most economic analysts see little for Asean and the other nations to be excited about at this stage. Trade experts believe that negotiating specifics on the IPEF could take as long as 12-18 months if not longer, especially if Biden is hamstrung by Congress after the mid-term elections. The other issue is the rebuilding of trust. The IPEF comes in the aftermath of the Trans-Pacific Partnership (TPP) from which former president Donald Trump abruptly withdrew in 2017. Moreover, unlike the TPP the IPEF does not promise free trade or lower tariffs.

Asked the reasons why US Trade Representative Katherine Tai was candid. “The TPP, as it was envisioned, ultimately was something that was quite fragile and that the United States was not able to deliver on. And that informs very much our thinking about bringing the Indo-Pacific Economic Framework, as it’s designed here, to the region — which is that trade is an important component of this, but not the only component. So that we are bringing in more robust and comprehensive approach to our partners in this region.”

Tai’s remarks underscore the dilemma the Biden administration faces. On the one hand, they must look to be economically aggressive in the Indo-Pacific, on the other, US voters will not allow them to lower tariffs or set up a free trade agreement. Such a deal makes this deal a hard sell despite the sweeteners that Washington is promising such as the possible relocation of production of US firms such as Apple from China to trusted IPEF countries.

Japan’s Prime Minister Fumio Kishida seemed to sum up the general mood when he said that while Tokyo would “participate and cooperate” in the new framework, “from a strategic standpoint, Japan hopes that the United States will return to the TPP.” Kishida’s statements were all the more telling given that Taiwan was not invited to be part of the IPEF. This despite Taipei being a leading manufacturer of computer chips – a key element of the digital economy that is part of the four initiatives the Biden administration is focussing on. The other areas include supply chain commitments, clean-energy and decarbonisation.