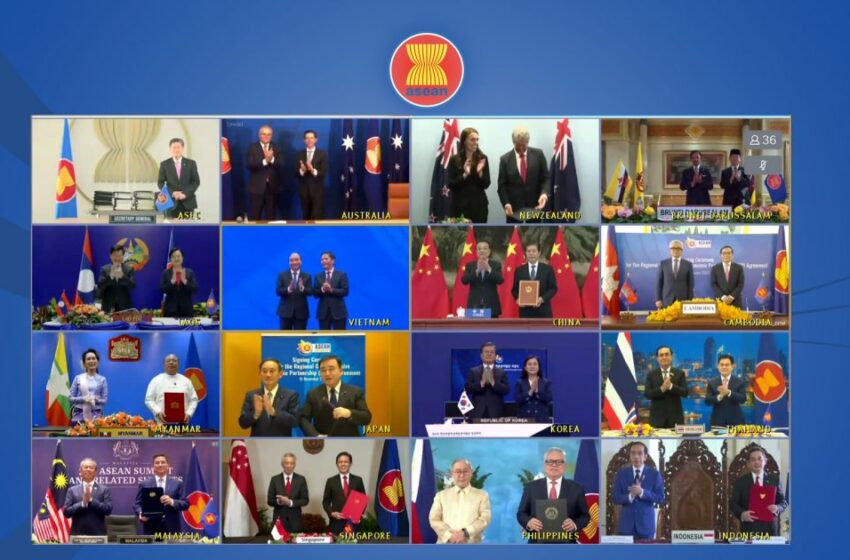 The Regional Comprehensive Economic Partnership (RCEP) was signed by 15 countries, including China, on Sunday. (Photo: https://rcepsec.org/)

NEW DELHI: Fifteen countries, including Australia and Japan that are members of the Quad, have signed the Regional Comprehensive Economic Partnership (RCEP). How does this impact the larger Indo-Pacific concerns and strategy? Will commitment to the Indo-Pacific gradually get diluted as other countries scramble to get on board the RCEP gravy train?

Answers to these questions may not be available immediately since RCEP is yet to come into force (it will next year). Thereafter, it will be another two or three years before any of these countries is in a position to determine whether and by how much RCEP has benefited their economy. If it is determined that RCEP has only boosted China’s exports to their detriment, then some kind of pushback can be expected from these and other member states.

There’s little doubt how China sees this. Xu Liping, Director, Centre for Southeast Asian Studies at the Chinese Academy of Social Sciences in Beijing, was quoted in the ‘South China Morning Post’ as saying: “Considering U.S.-China trade tensions, and the uncertainties of trade with the EU, the RCEP gives China a new and committed market for trade which could ultimately change the global trade structure that has always seen Western countries as ultimate trade destinations.”

Renmin University’s school of international studies was euphoric. In a commentary reproduced in the same paper, it said “(RCEP) counters the numerous pressures from the China-US economic decoupling and changes in supply chains.”

There is an important point to note here. China is already deeply entrenched in Southeast Asia. The 10-member ASEAN bloc is heavily dependent on the China trade and although it has called out Beijing’s muscle flexing in the South China Sea and resisted its proposed Code of Conduct for that region, it’s not clear how long the group can hold out. ASEAN is primarily a bunch of trading economies with little military wherewithal to take on China.

Faith in U.S. military power has eroded with President Trump turning away from alliances and seeking to end America’s many wars. Joe Biden is an unknown quantity at this point. While Australia is now a member of the Quad and taken a number of steps to limit China’s inroads into the country, it was not very long ago when Canberra cited commercial ties with China to pull out of a Quad exercise. Japan too is heavily dependent on the China trade. At the same time, it is under pressure from China which is claiming the Senkaku islands. Membership of the Quad could give it some insurance but what if Tokyo prioritises trade over security?

Japan’s Foreign Minister Toshimitsu Motegi insisted that his country will continue to push for free trade, rule of law and freedom of navigation to counter China’s military assertiveness in the region. He said: “Japan needs to resolutely prevent China’s unilateral attempts to change the status quo in the east and South China Seas by force.”

But is the commitment of the main player in doubt? Motegi voiced his unease saying that “Japan has a major challenge (in ensuring) the US remains committed to order in the Indo-Pacific region …”

This flows from the view that President-elect Joe Biden may not subscribe to Donald Trump’s strategy of taking on China. Will he seek to take the edge off the trade war with China? It won’t be easy given the bipartisan consensus about China that members of Congress subscribe to. There is also the concern that Biden will be preoccupied with domestic matters notably the pandemic, at least in the initial period of his administration, which could preclude any great focus on foreign affairs.