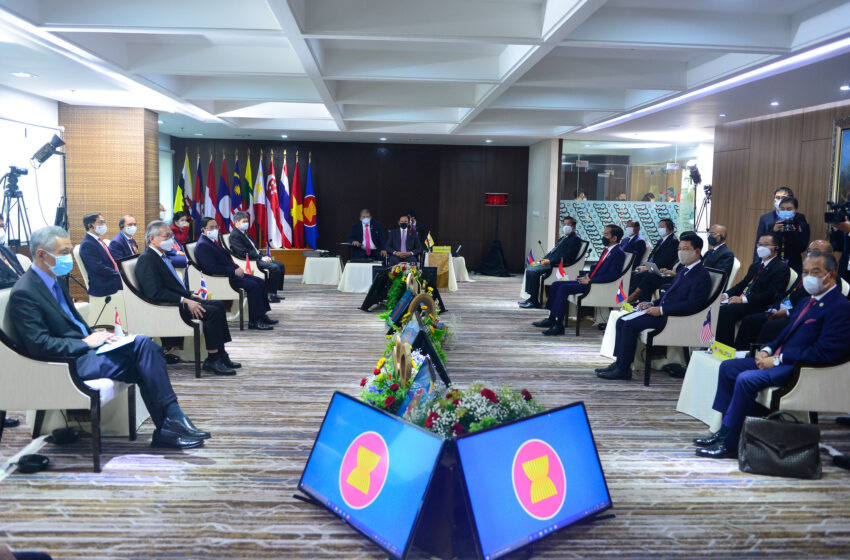 ASEAN leaders at a meeting in Jakarta on Saturday. (Photo: asean.org)

NEW DELHI: For an organisation committed to non-interference in each member’s internal affairs, a summit of some ASEAN leaders with Myanmar’s general Min Aung Hlaing in Jakarta is probably historic. Add to that consensus on five points was reached, according to various reports:

Now here’s the problem. There’s no indication whether the above consensus points are going to flow in any sequence. Also, there’s no time line, which plays into the hands of the military. It can continue its crackdown in the full knowledge that time is on their side, that the civil uprising by an unarmed public can last only that long. In fact, critics say by the very act of inviting Gen Min Aung Hlaing to sit with other ASEAN leaders, he’s been given legitimacy. Reports said Gen Min Aung Hlaing was given ample opportunity to speak, and he did for about half an hour. He claimed the situation was improving, insisted that only 247 people had been killed (not 745 as other reports say) and accused “unknown forces” of involvement in the other deaths.

Ideally, some analysts say, ASEAN should have sent a delegation to Myanmar, which may have even enabled a meeting with Suu Kyi and other leaders. But for whatever reason, that never happened. The key question is whether ASEAN will ensure the Myanmar strongman will keep to his word. And what the organisation will do if he fails to.

Local media did take note of the fact that key ASEAN leaders did not turn up for the meeting. The presidents of Thailand and the Philippines claimed Covid issues. Laos didn’t bother to give an explanation. Add to that, Singapore, Malaysia and Indonesia have been very critical of the military regime. Clearly, ASEAN is a divided house but by inviting the general to Jakarta, the grouping has favoured the strongman and even tacitly endorsed his coup.

That leaves the question as to the possible role of some of Myanmar’s other neighbours, such as China and India. The former has stalled any move in the UN Security Council to proscribe and sanction Myanmar. One could even argue that for a nation which walled itself off from the world for 50 years, would further isolation even matter? The presence of Russia’s deputy defence minister in Naypyitaw late last month, provides further evidence of the convergence between Beijing and Moscow when it comes to countering the West.

Last word on India, which has counselled restraint on the Myanmar military and urged that democracy be restored. It’s not clear how seriously the military regime views India’s exhortations given the close strategic ties between the two countries. India recently gifted a Kilo class submarine to Myanmar for training purposes and these ties continue to expand. India is not expected to lean too hard on the military regime since that could play to China’s advantage. The only casualties here are Myanmar’s hapless people.