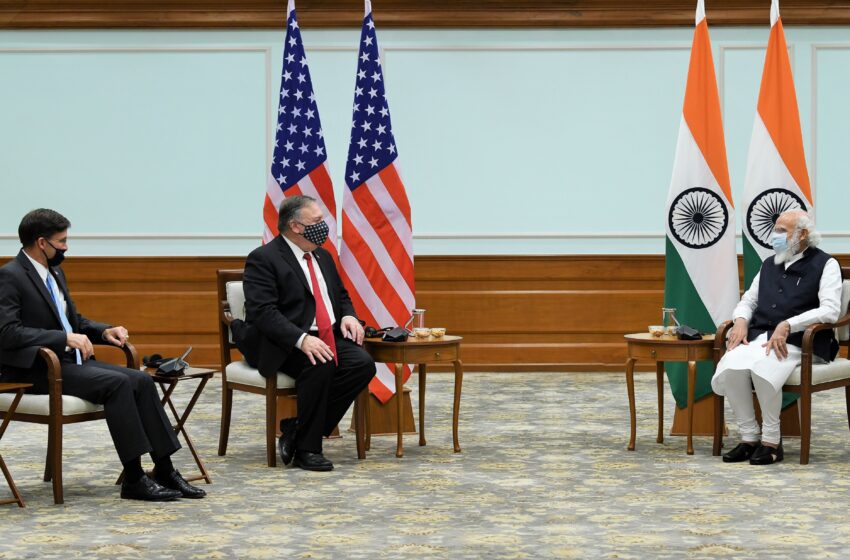 NEW DELHI: China was in the cross-hairs of India and the US when the two sides met for the third India-U.S. 2+2 Ministerial Dialogue in New Delhi on Tuesday, vowing to work together to “support shared interests in promoting security and prosperity in the Indo-Pacific region and beyond.”

The growing strategic convergence between India and the US also saw the two sides finally inking the landmark Basic Exchange and Cooperation Agreement (BECA) that will enable the sharing of geospatial maps and classified satellite data between the armed forces of the two countries.

It’s the fourth foundational military pact inked between India and the US and it comes at a time when its troops are locked in a stand-off with the Chinese PLA in eastern Ladakh.

Importantly for India, today’s meeting also saw the joint statement asking Pakistan “to take immediate, sustained and irreversible action to ensure that no territory under its control is used for terrorist attacks, and to expeditiously bring to justice the perpetrators and planners of all such attacks, including 26/11 Mumbai, Uri, and Pathankot”.

But it was China that clearly occupied centre-stage during today’s meeting. The six months long military confrontation found mention in Indian defence minister Rajnath Singh’s remarks during the 2+2 dialogue. The transcript of the opening remarks by Singh at the meeting released by the US state department said, “in the area of defence, we are challenged by reckless aggression on our northern borders–(inaudible).

Pompeo was even more searing in his remarks after the Dialogue noting, “The United States will stand with the people of India as they confront threats to their sovereignty and to their liberty.”

He further said, “The challenge of defeating the pandemic that came from Wuhan also fed into our robust discussions on the Chinese Communist Party. Our leaders and our citizens see with increasing clarity that the CCP is no friend to democracy, the rule of law, transparency, nor to freedom of navigation—the foundation of a free and open and prosperous Indo-Pacific.”

While the Indo-Pacific had found detailed mention in the joint statement after last year’s 2+2 Dialogue too, this time there was an entire separate sub-section titled ‘Shared Vision for the Indo-Pacific and Global Leadership’ this time.

It was also for the first time that the joint statement found mention of the South China Sea, yet another indication of New Delhi’s willingness to point fingers at Beijing for its territorial expansionism. The statement said, “the Code of Conduct in the South China Sea should not prejudice the legitimate rights and interests of any nation in accordance with international law”.

The two sides also chose to mention the decision by India to invite India for the Malabar exercise next year in the joint statement. It said, “The Ministers welcomed the inclusion of the Royal Australian Navy in the US-India-Japan MALABAR Naval Exercise scheduled to be held in the Bay of Bengal and the Arabian Sea in November 2020.”

The coming together of the Quad with Australia now invited for this naval exercise is again seen as a step to counter China’s increasing muscle-flexing in the region.

With regard to the Covid-19 pandemic, the two sides “reaffirmed efforts to enhance supply chain resilience and to seek alternatives to the current paradigm, which had come under severe strain during the pandemic and exposed critical vulnerabilities”.

The two sides also said they “looked forward to the conclusion of an overarching MoU between India’s Ministry of Health and Family Welfare and the US Department of Health and Human Services (HHS), including their component agencies and departments, to enhance health cooperation, including on health emergencies and pandemics, prevention, diagnosis and treatment of communicable and non-communicable diseases, and biomedical research and innovation”.