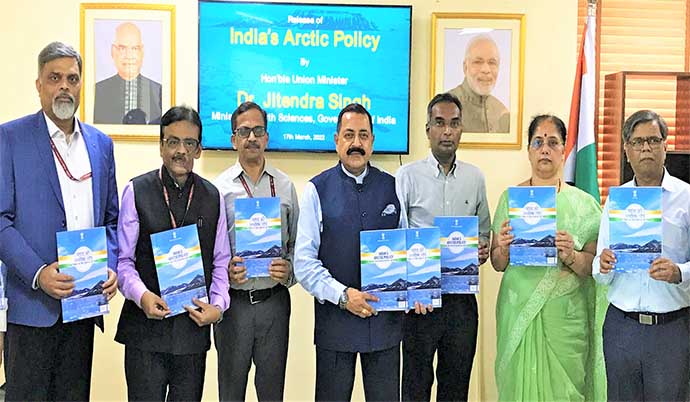 NEW DELHI: In quick succession, India has come up with two long-pending documents delineating its objectives for the polar realms of the Arctic and Antarctica. On March 17, Dr Jitendra Singh, Minister of State (Independent Charge) Earth Science, released India’s crucial Arctic Policy, aptly titled, 'India and the Arctic: Building a Partnership for Sustainable Development.' On April 1, Dr Jitendra Singh introduced another impending legislation, The Indian Antarctic Bill, 2022, in Lok Sabha. The back-to-back developments signify a never-before swiftness in India's strategy-making for the icy poles of our planet. India's science diplomacy has been the main driver of Arctic and Antarctic presence and operations over the past four decades. But recently, economic and political diplomacy has taken a lead role. Since 2017-18 India has regularly engaged with almost all Arctic littoral states bilaterally or multilaterally. It began with Prime Minister Narendra Modi's participation in the Nordic Summit with the national leadership of the Nordic countries—Denmark, Finland, Sweden, Norway, and Iceland—in Stockholm in April 2018. During the summit, India and the Nordic 5 did not directly discuss Arctic affairs but India did consolidate partnerships with them on Sustainable Development Goals, trade, climate change solutions, agriculture, public- and private-sector collaborations, academic exchange, health and life science, and smart cities. Additionally, India also used the summit to secure support from the Nordic countries for its permanent seat in the reformed United Nations Security Council. It is important to note that India has support for its permanent seat from all Eurasian Arctic coastal nations, including the largest, Russia....Read More