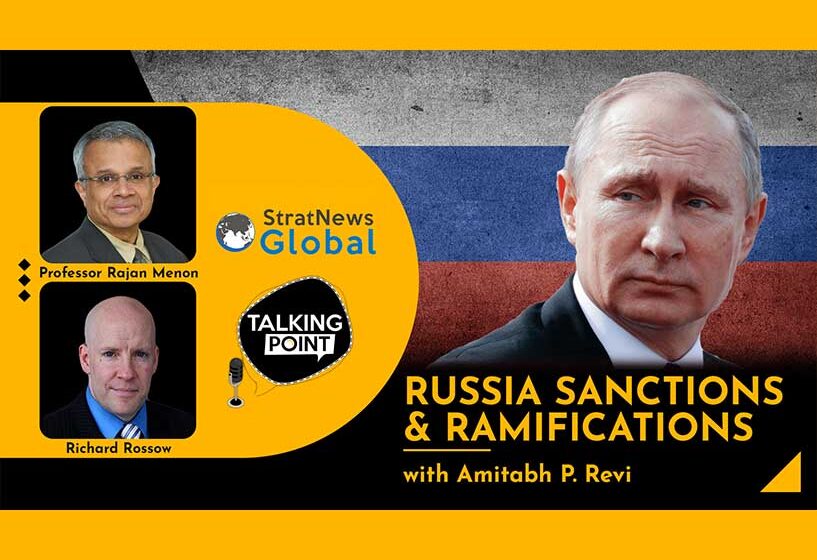 RR: The Indian economy is still very sensitive to the price of oil, a little bit less to the price of other metals and commodities. It’s true that prices of all things begin to rise as manufacturing costs begin to go up and you’re going to feel the pinch. India already has a massive import bill which is triggering a lot of policymaking from Delhi, trying to local-source a lot of things that the country imports. For oil that’s been so far very difficult to do even with dramatic expansion in the amount of acreage under exploration in India. So I see mostly downsides, but there are some potential bright spots. For instance, you have seen Eastern Europe be one of the competing markets against India for things like IT services and because of instability in Europe, you may see some of that work come back to India in a big way. So, there could be some potential small bright spots, but I see more downside risk, at least in the near, mid term.

RM: I’m not an expert like Richard is, but there’s one thing that bears watching and that is, when India takes delivery of the S-400s, the very sophisticated Russian air defence system, will it trigger the CAATSA sanctions? I don’t know whether it will or not, but people are certainly raising that issue here. One could argue that Modi’s India is seen as a kind of a budding strategic partner. On the other hand, India abstained from the (UN) resolutions. It is a very significant military purchaser of Russian equipment. And I don’t know how this will play out. So far, as I know, CAATSA hasn’t been raised and thrown on the front burner because of too many other things going on, but it’s something to keep your eye on.

APR: How do you see India’s legacy dependency on Russian arms and military supplies, especially in light of what’s happening with China? I’ve read Dhruv Jaishankar writing recently that it’s India’s 1991 economic moment in terms of military pivoting away.

RM: So just before I answer that, very quickly, in addition to the increase in prices of a lot of things from metals to lead to energy, there has also been a further disruption of the global supply chains which were already made bad by the pandemic. Now, on the India-Russia arms relationship two things: the Indian arms market is open to international competition in a way that it has not been in my memory. The Soviets slash the Russians had a lock on it. Now, because the Indian force structure is still composed of either imported Russian /Soviet equipment, or equipment made under licence, this cannot happen very quickly. One of the reasons why India has treaded lightly on the Russia-Ukraine war or not jumped into condemning Russia is that there’s a lot at stake for the Indian government. You do have Western, Israeli armament companies operating in the Indian market and eyeing it as a potential market. But, there’s a legacy problem with Russian equipment that cannot be overcome quickly.

APR: On the CAATSA question, there were indications coming out of the Biden administration, that they understood the position that India was in. With China being the bigger threat for countries around the world, there would probably be a waiver, but then there is Congress and then there’s the invasion. Do you see anything changing in Washington because of what’s been happening?

RR: It’s a cloudy situation at best. Before the invasion, we had a narrow pathway. It seemed more likely than not that a waiver would be granted. But now, there is disappointment in large sectors of the U.S. security establishment that would like to see India-they talk about shared values and democracy-take a harder position. I think those that are in the trenches, that are working day and night, to try to create a stronger defence posture vis a vis the dangerous elements of the rise of China, that’s the group that’s willing to give a little bit more leeway for India. And we’ll look for a pathway through. There is of course a waiver authority that’s included in the legislation. It’s very narrow and it’s got language on things like is the country supporting America’s security interests globally. And those are the areas that I think have pinched a little bit more sharply closed because of this invasion and because of the perception that India hasn’t really taken a stronger stance. India is in a campaign here, certainly the Indian government is, to try to sell its own message more broadly in Washington. Whether that resonates is tough to see, because we are just probably a few months away from when India will have the S-400s deployed and tested. That was the trigger point for Turkey. So, it looks like we’re just a few months away from decision time. This invasion, in that sense, couldn’t have happened at a worse time.