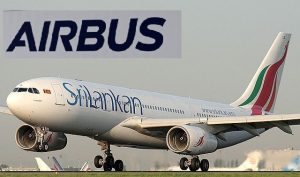 International reports revealed on Saturday that Airbus had bribed the wife of an executive of SriLankan Airlines to secure an aircraft deal.

The scam is a part of Airbus’s massive scheme to offer and pay bribes to secure deals in many countries, disclosures in courts in Washington DC, Paris and London have revealed.

Investigators revealed that between 1 July 2011 and 1 June 2015, Airbus SE failed to prevent persons associated with it from bribing others concerned with the purchase of aircraft by SriLankan Airlines (SLA) from Airbus, namely directors and/or employees of SLA.

Nishantha Wickremasinghe was the SLA Chairman at the time of the controversy while Kapila Chandrasena was the Director/Chief Executive Officer and the others on the board were Nihal Jayamanne PC, Shameendra Rajapaksa, Manilal Fernando, Lakshmi Sangakkara, Sanath Ukwatte and Susantha Ratnayake.

Investigations found that in 2013, an Airbus intermediary engaged with the wife of a SLA executive as a business partner through a straw company which was registered in Brunei.

Pursuant to the engagement, Airbus employees offered up to $16.84 million to the company of the intermediary to influence SLA’s purchase of 10 Airbus aircraft and the lease of an additional four aircraft.

Pursuant to this agreement, the company of the intermediary would be paid $1 million on the delivery of each A330 aircraft and $1.16 million for each A350 aircraft purchased by SLA and $300,000 for each additional A350 aircraft leased by SLA.

On 30 October 2015, Airbus also signed a market share agreement, which stipulated that the company of the intermediary would receive a $5 million lump sum if SLA did not purchase any competitor aircraft before 30 October 2015.

The promised payments were up to $16.84 million. On 26 August 2013, the company of the intermediary submitted an invoice for the first $1 million pursuant to the consultant agreement.

Airbus received from the SLA executive a further invoice for an additional $1 million on 2 December 2013. Payment was approved by Airbus and $2 million was paid in Euros to the company of the intermediary on 27 December 2013.

As a result of apparent over-ordering of aircraft under the then airline administration, the management which took office in 2015 had to cancel the lease of some aircraft at a cost of $98 million, and commenced negotiations with Airbus to cancel the purchase of four of the ten aircraft.