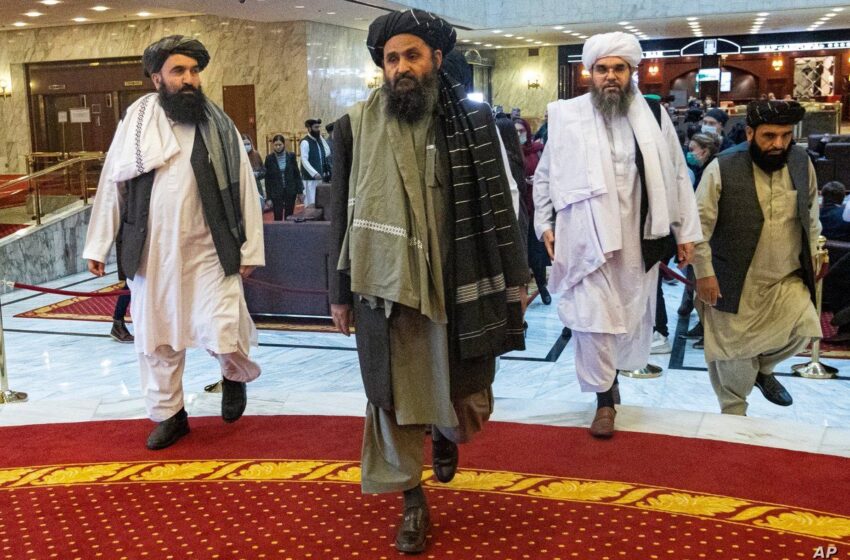 Mullah Abdul Ghani Baradar who is widely tipped to be the next president of Afghanistan with other members of the Taliban. Source Twitter

NEW DELHI: Nearly 20 years after being driven out of Afghanistan by a combination of US air power and ethnic militias on the ground, the Taliban are back in the saddle in Kabul. The founder of the group Mullah Mohammad Omar died in 2013, but it was two years before the Taliban confirmed he was no more. In the interim, successive leaders were killed in drone strikes. A quick brief on the current leadership.

A religious scholar he is known as the “Leader of the Faithful”. More importantly, he is the Taliban’s supreme leader who holds final authority over the group’s political, religious, and military affairs. He was believed to have been a senior figure in Taliban and responsible for handing out Islamic punishments. He worked as deputy to the then Taliban chief Akhtar Mohammad Mansour who was killed in a US drone strike in 2016. Since then, he has been in charge though reports of his illness and even death have done the rounds. Some Afghan watchers on Twitter claim that he will make a public appearance in Kandahar, the home province of Mullah Omar in a few days.

Mullah Abdul Ghani Baradar is co-founder of the Taliban movement (along with Mullah Omar his brother-in-law) and media reports suggest that he is likely to be the president in the Taliban regime. He is the public face of the Taliban and its political chief and was viewed by Western intelligence agencies as a moderate most amenable to peace deals.

Born and brought up in Kandahar, Baradar fought against the Soviets in the 1980s and then went on to found the Taliban in the 1990s. He is believed to be one among a small number of insurgents who, after they were driven out of Afghanistan in 2001, went to interim president Hamid Karzai with a letter promising support for the new government if they were allowed to join. This deal was apparently blocked by the Americans who were determined to have no compromise with the Taliban at that time.

Baradar was captured in a joint US-Pakistan raid in Karachi in February 2010 and released eight years later. He relocated to Qatar after then-president Trump made the request as a part of the peace talks and was a signatory to the Doha agreement. The agreement is now seen as the stepping stone towards a Taliban victory.

Along with Mullah Mohammad Yaqoob, son of Mullah Omar, Haqqani is deputy head of the movement. He is the leader of the Haqqani network, a Sunni militant organisation founded by his father Jalaluddin Haqqani. His naming as the deputy to then Taliban leader Mullah Akhtar Mohammed Mansur cemented ties between the Haqqanis and the Taliban.

The Haqqanis have a colourful past. Jalaluddin Haqqani was labelled a “prized asset” by the CIA in the 1980s for his work in fighting the Soviets. US Congressman Charlie Wilson called him “goodness personified.” However, things changed dramatically after 9/11. The Haqqani group joined the attack against the US and US-backed groups. Today, his son Sirajuddin Haqqani is designated a “global terrorist” by the US and has a $10 million bounty on his head. There is good reason. He introduced suicide bomb attacks, attacks on embassies and taking western citizens, and even US soldiers, hostage.

In an opinion piece for the New York Times last year, Haqqani wrote. “We did not choose our war with the foreign coalition led by the United States. We were forced to defend ourselves.”

“We will remain committed to all international conventions as long as they are compatible with Islamic principles. And we expect other countries to respect the sovereignty and stability of our country and consider it as a ground for cooperation rather than competition and conflict.”

The son of Taliban founder Mullah Omar, Yaqoob oversees the group’s military operations. Post the death of his father he rose through the Taliban ranks to become deputy head along with Sirajuddin Haqqani. Rumours that the more senior Taliban leaders were infected with Covid-19 is believed to have helped his rise to the top and today he is said to be running day-to-day military operations. He is believed to be more moderate than Haqqani and his elevation to be the Taliban’s military chief came at the urging of Saudi leaders whom he has strong ties.

The Saudis are believed to have insisted that Yaqoob replace Mullah Ibrahim Sadr, a powerful field commander, who opposed peace efforts. What will also be of interest to India is that he is believed to have been trained by the Pakistani militant group, the Jaish-e-Mohammad (JeM), masterminds of the Pulwama attack in Kashmir in 2019.