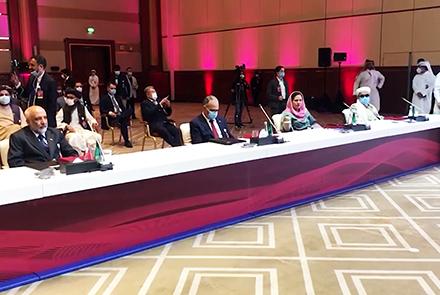 KABUL: A month after the beginning of the intra-Afghan talks between the Taliban and the Afghan government, there has been little progress towards their ultimate goal of securing an agreement over Afghanistan’s political future.

The parties are still dealing with technicalities including establishing ground rules for conducting the negotiations, a framework for resolving differences over contentious points and an agenda for the talks. Overall, a set of illusions appears to be masking the ugly underlying realities that cloud Afghanistan’s future.

It is also not surprising that the Taliban is keen on basing the negotiations on the Doha agreement, which generously favours the group and completely bypasses the Afghan state. The agreement neither asked the insurgents to renounce violence or terrorism nor has it demanded recognition of the Afghan state, a rational part of any agreement between state and non-state actors. The delegation of the Islamic Republic of Afghanistan, on the other hand, is referring to the framework approved by the recent inclusive Loya Jirga held in Kabul and the joint statement by the U.S. and Afghan government about the peace process.

These disagreements are further complicated by the Taliban’s reluctance to either declare a permanent ceasefire or commit to a reduction in violence. Last month, Zalmay Khalilzad, Washington’s envoy for Afghan reconciliation, predicted that the Taliban would not accept a permanent ceasefire before reaching a political deal with Kabul. He had previously reiterated that a reduction in violence is required by the Doha deal. It goes without saying that growing violence can seriously derail the peace process altogether if it becomes unmanageable.

In this context, the visit of Dr Abdullah Abdullah, head of the Afghan High Council for National Reconciliation, to Islamabad late last month has been significant because the Doha process is practically a sideshow in comparison to negotiations in Islamabad when it comes to decision-making by the Taliban. Its leadership is still based in Pakistan despite the group’s claims about its control over the greater part of Afghanistan.

But more importantly, despite public denials and claims of a course correction, Pakistan’s security state has its own “way forward” for Afghanistan. Actually, the real handlers of the Taliban in Pakistan’s security establishment would have loved to host the intra-Afghan dialogue in Islamabad instead of conducting it in Doha. However, some of the civilian experts were ultimately able to persuade military leaders that it could have created the impression of an effort to impose a ‘Made in Pakistan’ solution. It could also have revived the unpleasant memories of the botched efforts by Inter-Services Intelligence (ISI) at government formation by Mujahideen groups in 1992.

Pakistan has come a long way from denying the existence of Taliban sanctuaries on its soil to owning the presence of the Taliban and adopting the role of a peacemaker by claiming credit for persuading them to join talks with Washington and Kabul. This is why the Doha deal between the U.S. and the Taliban has no mention of Taliban sanctuaries in Pakistan despite the strong demand for ending these sanctuaries by U.S. and Afghan political and military leaders for many years.

This transition was also made possible by a paradigm shift in U.S. policy towards the Taliban. Washington toppled the Taliban’s emirate shortly after 9/11, after labelling the group terrorists and identifying them as part of Al-Qaeda’s franchise, which planned and executed the 9/11 attacks. After nearly two decades of fighting, the U.S. position has undergone a sea change. In the short term, the U.S. appeasement of the Taliban seems to be guided by U.S. President Donald Trump’s election interests. His administration needs to take credit for a foreign policy success by ending what is dubbed the longest war in American history.

However, in the long term, the U.S. position on the Taliban is part of the West’s new Cold War with China, which enjoys bipartisan support in America. The Taliban, after renouncing anti-U.S. designs with Pakistan as guarantor, can be regarded as a potential ally in the new international alignment against Beijing. By now it seems plausible that from the very beginning Washington never regarded the Taliban, unlike Al-Qaida and a few other groups, as a real threat to the security of mainland America. Washington viewed the Taliban as a regional problem that could create difficulties for China, Russia, Iran and India. So why would the U.S. go all the way to dismantle or eliminate the movement?

This has created new space for Pakistani generals to leverage their influence in Afghanistan. In Rawalpindi, the predominantly Punjabi generals think they can secure their interests by delivering a settlement in Afghanistan. For them, Washington’s push to inject the Taliban into the Afghan state system is a blessing. It is expected to strengthen the theocratic character of the Afghan state and society—a Sunni theocracy ready to counter a Shia clerical regime in neighboring Iran. Some of the 36,000 thousand madrassas operating in Pakistan will eventually extend their branches to Afghanistan (including separate seminaries for girls), which will reinforce the Talibanization of Afghanistan.

Apart from its influence over the Taliban, the Pakistani security apparatus has deep old contacts among former Afghan Mujahideen leaders. Some of the Taliban and former Mujahideen leaders have large-scale investments and economic interests in Pakistan. Although Pakistani authorities have been quite harsh towards common Afghan refugees in recent times, they have allowed some of the Afghan elites to invest in business and buy big properties in Pakistan. The said contacts will come handy in cobbling together an “acceptable” coalition. The Pakistani handlers of the Taliban do not see any problem in accommodating any Afghan politicians from the north of the country, as long as they are ready to play second fiddle to the Taliban. Managing high profile Pashtun leaders with a national appeal in Afghanistan will be a problem.

To counter nationalist Afghan leaders, however, the Pakistani policy will include touting the Taliban as “representatives of Pashtuns,” as a solution to the Pashtun question on both sides of the Durand Line.

The regrouping of the Taliban in the former FATA districts, simultaneous with the group’s ascendency in Afghanistan, reflects this policy. Pakistan also has a “black list” of Afghan leaders who are to be blocked from coming into power. Anyone deemed as actively standing up for Afghan national interests is on this list. Islamabad very conveniently wants to label them “pro India” to push them out of future governments. Pakistani intelligence agencies are quite adept at political engineering and power games in Pakistan. They will use some of that expertise in Afghan power games as well.

Pakistani movers and shakers of their country’s Afghan policy have accumulated all the levers for shaping an endgame in Afghanistan. From transit trade, visas, border management to fighting Daesh, they are using all real and perceived issues as bargaining chips. They appear to be positioning themselves to break the expected impasse over a permanent ceasefire between the Afghan sides, and to overcome the Taliban’s reluctance to join the Afghan Islamic Republic, thus ending the group’s quest to reestablish its emirate.

Pakistani strategists will likely use a fatwa or religious ruling to convince the rank-and-file Taliban to embrace the Islamic Republic and an armistice once a deal is in sight. This will enable the Pakistani generals to have a permanent role and continuing influence in Afghanistan through the Taliban—a ‘soft’ version of the strategic depth they have sought since the 1980s.

Islamabad is currently dealing with an economic meltdown and internal political fragmentation but Pakistan’s army regards the situation as a unique opportunity to project its power in the region with potential future dividends in Central Asia. It not only gives an edge to Pakistani generals in their internal power equations but also makes them relevant in their relations with big powers.

On the face of it, the aforementioned game plan may sound impressive but it would be foolish to underestimate Afghans. They have a unique capacity for springing surprises on foreigners whom they suspect of cheating. Remember the Jalalabad attack of 1989 after the withdrawal of Soviet forces? It humiliated the “winners” of the Cold War. The micromanaging of Afghan politics by outsiders failed in the 1990s and created huge problems for the region and the world. Imposed solutions will not work in the new Afghanistan, especially with its youth bulge and growing urbanization.

Players from all sides, particularly the U.S. and Pakistan, need to rethink their strategy. Reconciliation and peace can be achieved by a fair deal that accommodates all sides. Governments will keep changing—that is not the issue. But “rules of the game” are required. To achieve such rules, the Afghan state system, based on the Afghan Constitution, should be strengthened and should remain the focus of all efforts.

(Afrasiab Khattak is a former member of Pakistan’s senate and an analyst of regional affairs. Views expressed in this article are personal.)