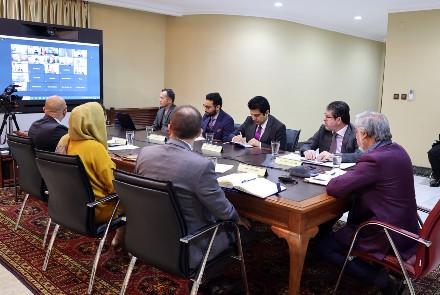 KABUL: Afghanistan’s international partners, in a virtual meeting with Afghan officials, have announced their support for the peace efforts, ceasefire and humanitarian values in the country, the High Council for National Reconciliation has said.

The event was the second monthly meeting of the High Council for National Reconciliation’s Regional and International Affairs Commission with members of Kabul’s diplomatic corps.

The diplomatic corps and international partners shared their views and unanimously supported the peace efforts lead by the High Council for National Reconciliation, called for immediate ceasefire and the acceleration of the talks, condemned the targeted killings and insisted on a unified message in support of Afghanistan the peace process, Abdullah said.

“Our negotiating team is in Qatar. They’re back there on time. They had plenty of meetings with different stakeholders,” Abdullah said. “The guiding principles were approved, which were approved by the leadership committee of the High Council for National Reconciliation.”

“Achieving an inclusive peaceful settlement is our goal and preserving the achievements of the past 20 years—which are the sacrifices of our people—these are the guiding principles for our negotiating team,” he said.

According to the reconciliation council’s statement, the common points in the meeting were support for the peace efforts, a call for immediate ceasefire, expedition of peace efforts in Doha, an Afghan-led and Afghan-owned peace, and condemnation of targeting killings.

Stanekzai said discussions are under way on the agenda of the talks and that serious discussions on the agreed points will start by the end of this week.