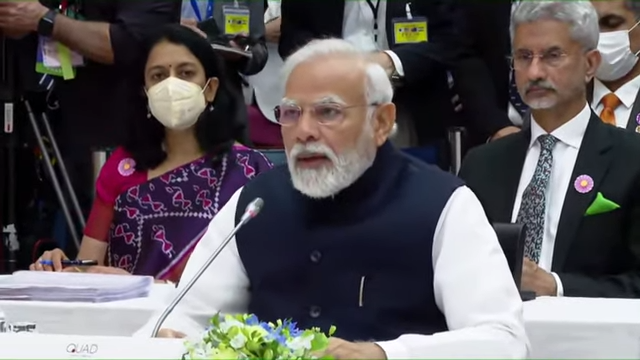 NEW DELHI: The Quad joint statement released at the end of the summit in Tokyo on Tuesday, could well be described as a masterpiece of managing differences. On Ukraine, without mentioning Russia by name and in obvious deference to India, the statement said, “We strongly support the principles of freedom, rule of law, democratic values, sovereignty and territorial integrity, peaceful settlement of disputes…”

Note also Prime Minister Kishida’s remarks, “Even amongst like-minded countries, the positions may not agree fully. That is only natural. But with that as a premise, to deepen mutual understanding and to spread cooperation and collaboration would be crucial among the Quad members.”

Herein lies the key to the future success of the Quad: that differences and divergences would be managed given that all parties agree there is a larger threat they face and must counter. So India held its peace, Prime Minister Modi never mentioning Russia or Ukraine at any time in his public remarks. It didn’t matter that in the inner councils of the Quad, Ukraine and Russia were discussed threadbare with President Biden making it clear that Ukraine was “more than an European issue. It’s a global issue,” and warning that it had the potential to spill over into the Indo Pacific.

The joint statement took deliberate aim at China (without of course mentioning it). It said: “We encourage … increased European engagement in the Indo Pacific region … will champion adherence to international law … maintenance of freedom of navigation and overflight … strongly oppose any coercive or unilateral action that seeks to change the status quo…”

Shots were also fired at what are seen as China’s foreign aid policies that lead to indebtedness among developing nations. The Quad Debt Management Resource Portal will help provide bilateral and multilateral capacity building assistance. There was also a promise to extend $50 billion in assistance to build infrastructure in the Indo Pacific.

There was emphasis on strengthening co-operation with Pacific Island nations, a move which comes in the aftermath of China’s security deals with the Solomon Islands. The islands are located close to Australia but also threatens Japan and could put further pressure on Taiwan. The move also puts China in proximity with the US military base on Guam.

The launch of Q-CHAMP (Quad Climate Change Adaptation and Mitigation Package) was a “recognition of the urgent need to address climate change as emphasised in the latest Intergovernmental Panel on Climate Change (IPCC) reports, we will steadfastly implement the Paris Agreement and deliver on the outcomes of COP26.” This would be done by reaching out to key stakeholders in the Indo-Pacific, providing climate finance and “facilitating the research, development, and deployment of innovative technology.”