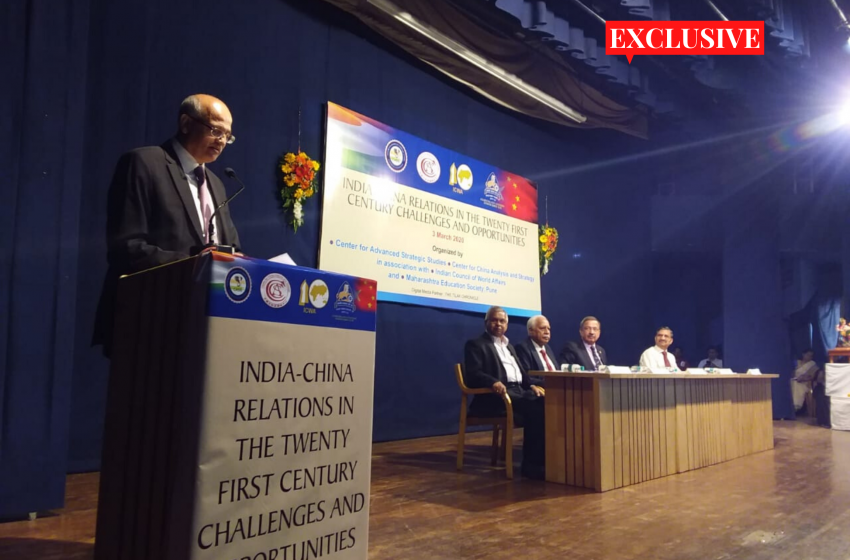 NEW DELHI: Democracy is India’s greatest asset and poses a challenge to the Beijing model, says former Foreign Secretary Vijay Gokhale. India must remain an independent player in the global strategic affairs game and needs to play to its strengths, he told a seminar in Pune on March 3.

Given below is the transcript of his address at the seminar on ‘India-China Relations in the 21st Century: Challenges & Opportunities’:

I am honoured to address all of you on a topic that will pre-occupy not just our Government, but every segment of our society for the next half century. It is already one of our two most important relationships and it might the subject of our primary interest in the next 25 years.

The topic suggests that we have the capacity to predict what is likely to happen in our relationship with China in this century. The truth is that in the past half-century, predictions about China have rarely been accurate. Few, if any, predicted that a new Communist State would be established in 1949 and that this State would almost tear itself apart during the Cultural Revolution in the 1960s and fewer still foretold of China’s spectacular rise to global power since then. The fact is that there is a paucity of scholarship on China, including in India. And this deficit is something we can ill afford, if we are to deal with, arguably, the greatest power in this century.

It might be useful to review, briefly, the course of India-China relations since 1949. In the initial years from 1949 until 1962, our policy towards China was based more on sentiment and less on fact. Having secured our independence in a relatively peaceful manner, our idealism led us to squander strategic advantages that we held, without asking for corresponding returns. For example, suo moto, we de-recognise the Republic of China (Taiwan) and removed their Ambassador from New Delhi and we likewise unilaterally made concessions on Tibet without seeking corresponding recognition from the Chinese on Jammu & Kashmir. The Chinese Communists had just won a civil war. Not for them a non-violent struggle, they were used to securing their interests through the use of violence. Lack of information and understanding about the new Chinese Government led to disaster in 1962.

From 1962 until roughly 1998, both India and China turned away from each other. China first turned inwards and then westwards in its search for modernisation. We first turned towards the Soviet Union and, when it collapsed in 1991, then inwards to address our own economic crisis. It is true that there were some important developments during this time—the reinstatement of Ambassadors in 1976 and Prime Minister Rajiv Gandhi’s visit in 1988 after a gap of 34 years but these were episodes neither side looked afresh at the relationship. Our scholarship on China remained focused on old issues like the boundary question or Tibet; there was no real scholarship on the policies that China was laying down for its giant economic leap.

1998 was a turning point. Our nuclear tests and our subsequent capacity to withstand intense international pressure caught the Chinese by surprise. They too had allowed their scholarship on India to atrophy when they turned to the West, and thus under-estimated both our strategic capabilities as well as our subsequent economic resilience. I would say that the year 2000 was the beginning of a new phase—we began to deal with each in a serious way. This is self-evident from facts. Trade grew from just under USD 1 billion in 2000 to over USD 70 billion by 2015; we began joint military exercises and an annual defence dialogue; a framework agreement on the guiding principles and political parameters to deal with the boundary question and CBMs in the border region came forth during this period. We began to engage even where new differences cropped up, like China’s opposition to the 1 2 3 Nuclear Deal in the NSG or their placing “Hold” on the listing of terrorists like Masood Azhar or Zaki-ur-Rehman Lakhavi in the UNSC 1267 Sanctions Committee.

I recounted this history because is important to recognise that the trajectory of India-China relations has not been linear in the past. We made some errors of judgements and we neglected scholarship on China. If we do not make up the knowledge deficit, we may again make the same mistakes. Our scholarship on China needs not only to take into account what is happening inside China but also what is happening in other parts of the world.

First, China is the largest global engine of growth and will be so for the next quarter century. The growth rate may slow down and new economic challenges may emerge but the capacity of the leadership to deal with such challenges has been consistently underestimated.

Second, China has a political leadership that has re-focused its attention to quality of life issues—environment, health care, education, innovation, new sciences. It is consciously charting out a path to go up the value chain. You can see the results in electric vehicles, renewable energy, 5G, AI and new materials. The West deluded itself for years that Chinese did not have the capacity to innovate. They overlooked that 3 per cent of the GDP was going into education and R&D for two decades. The Chinese have an army of educated people and are focused on ending the technological superiority of the United States.

Third, the leadership has decided that it’s strong enough to discard the earlier policy of keeping its head down for a new policy of asserting Chinese power. This new assertiveness under President Xi Jinping is manifesting itself in initiatives like the Belt & Road as well as by demonstrating that Chinese can take the pain of trade war with an U.S. economy that is still double the Chinese economy. And they no longer hesitate to deploy their power or to threaten those who resist their rise.

All these will have a bearing on how we deal with China.

Beyond China, we also live in a strange world. Usually, the established power tries to preserve the status quo; the emerging power seeks to create a new arrangement. From 2016, however, we have the unusual phenomenon of the status quo power, the United States itself challenging the very global instruments and facilities they have created, and the emerging power trying to defend the status quo wherever it has served Chinese interests (like the WTO) while challenging the post WW II security architecture in the Indo-Pacific. Hence, we are today leaving in a world in which both the major powers are simultaneously disruptive.

Our hope of a multipolar world remains just that, a hope—with the EU damaged by BREXIT, the Russians unable to leverage their vast resources to build a new economic basis for sustained power projections and Japan looking like a power who has let opportunity slip by.

This is the global setting in which we prepare to engage, arguably, with the next global hegemon.

The Chinese will deal with us based on how they see us. So, how do the Chinese see India today?

But there are new factors that China has also taken note of:

If my assessment is correct, and this of course is open to debate, then I would hazard the guess that China might follow a two-pronged strategy:

In either case, we should be clear that China will likely continue to follow its firm policy of strengthening its economic and military presence, whenever possible, in our immediate neighbourhood and Indian Ocean, reducing our wiggle room in the region and circumscribing our global ambitions by denying us space in international forums. In 2019 we saw the manner in which they used their diplomatic power in the UN to keep us on the back foot. This policy has served their interests well, there may be no reason to change that. Simultaneously, they will build an asymmetrical military balance vis-à-vis us, and also strengthen their ally, Pakistan’s, military capacity, as a hard deterrent. There is no reason to presume that if we “behave ourselves” the Chinese will not do any of this. They will do so anyway.

For us, therefore, the scenario I just outlined presents a serious challenge but also opportunities. These are two sides of the same coin provided we can develop a proper understanding of China both within the government and in larger society based on the facts, to deal with China, we need to do some things domestically:

In pursuing this approach, we should be mindful that we are an independent player, in the global strategic game, and at the same time, we should not allow our neighbours to play the China “card” to extract unilateral benefits. We cannot outspend the Chinese, nor should we, in our efforts to counter their influence in our neighbourhood. We need to play to our strengths.

Democracy is our greatest asset. Our very existence as a democratic state presents an existential challenge to the so-called Beijing Model. Our success in building our comprehensive national strength through democracy makes it ideologically difficult for the Communist Party to justify its model of non-elected leaderships. This is for China its greatest challenge.

Going ahead, I see some positives but with a preponderance of challenges caused by simultaneous growth in regional influence and China’s unwillingness to practice what it frequently preaches—that is, there is enough space in the world for both China and India to grow together. If our economy grows and we can maintain flexibility in our foreign and security policies with both global powers, I see no reason why we should repeat the errors of the past in our dealings with China in the future.