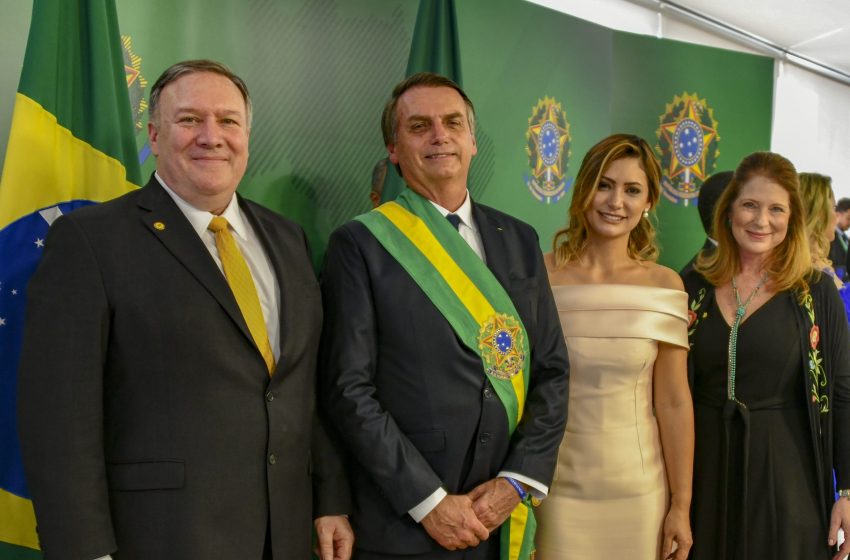 Brazilian President Jair Bolsonaro with his wife the First Lady poses with US Secretary of State Mike Pompeo and his wife.

NEW DELHI: Why is he doing it? This is the question Brazilians and indeed the rest of the world is asking as Brazilian President Jair Bolsonaro once again openly defied lockdown orders, set by his country’s own governors, to hold a mass rally in Sao Paolo on Sunday. All of this comes as the samba nation’s death toll from the pandemic has risen to over 2,000 – the highest in South America.

Despite a big thumbs down from his citizens — the president’s disapproval ratings have become the highest since he took office in January last year — Bolsonaro seems unapologetic about his tactics. Indeed, it has taken social media to get him to back off a bit. In a highly unusual move against a head of state, two of Bolsonaro’s Tweets and Facebook posts that gave incorrect information about the coronavirus were blocked and deleted by Twitter and Facebook last month.

In the tweets, which were posted as videos, the president walked around the streets of Brasilia claiming the anti-malaria drug hydroxychloroquine successfully treats the coronavirus. He also encouraged an end to social distancing and isolation measures in the country, statements that have had many Brazilians up in arms.

Bolsonaro is leading Brazil to the “slaughterhouse” fumed former president Lula da Silva in a recent interview with The Guardian.

Former Indian ambassador and an expert on Latin America Deepak Bhojwani believes such moves from the Brazilian president should hardly come as a surprise. “Bolsonaro has always seen himself as the ‘Donald Trump of the tropics.’ He is a populist candidate for the far right, and he is continuing to cater to them. His move to declare churches open to cater to evangelical Christians, his insistence that ‘Brazil is open for business’ is to cater to the rich business community that voted for him. So, the more protests there are against him the more necessary it is for him to hang on to his crucial support base.”

Bolsonaro’s bid to cater to his core constituencies is not without risk. By alienating the core public and politicians he has already opened himself up to possible moves towards impeachment. There is a precedent for this. Former president Dilma Rousseff was impeached in 2016. Bhojwani believes that impeachment is unlikely, but he does acknowledge that things are turning worse for the president by the day. “There has been a growing groundswell movement against Bolsonaro but what has come as a real slap in the face is the fact that the Brazilian Federal Tribunal (the equivalent of the Supreme Court) has allowed local governors and mayor to impose lockdowns and not the president.

“What this means is that he has lost institutional political power to a very large extent which is hurting him. Considering that the left is going to put up a very strong candidate, I frankly don’t see Bolsonaro as being an outright winner in the next elections.”

It isn’t just at home that Bolsonaro has created problems for himself. Recently, his son Congressman Eduardo Bolsonaro created problems for his father’s administration when, in a statement, he likened China’s role of hiding critical information about the pandemic as akin to what “the Soviet dictatorship did during the 1986 Chernobyl nuclear disaster.” Beijing immediately reacted with the Chinese embassy in Brazil calling the words “irresponsible” and demanding an “immediate retraction.”

The diplomatic showdown is clearly not in the nation’s best interest. In 2001, over 50% of Brazilian products went to the EU. Now they go to East Asia and mostly to China. Figures also show Brazil-China was 100 billion dollars bilateral trade in 2018 and now thanks to the ongoing US-China trade war, Beijing is now turning more to Brazil for agricultural products. Given the global slowdown post-pandemic, Brazil simply cannot afford to lose Beijing.

Despite aggravating friends and allies both at home and abroad, there is one country that Bolsonaro seems to have a soft corner for and that is India. Bhojwani says that after Trump, he was one of the first leaders to ask Prime Minister Narendra Modi to send hydroxychloroquine, which India readily agreed to.

“In his letter of thanks to our prime minister, Bolsonaro had talked about how Lord Hanuman brought the holy medicine from the Himalayas to save the life of Lakshman. It seems that from the letter he retains deep respect and affection for India.”