NEW DELHI: China’s recently concluded 20th Party Congress has revealed that the Indian security establishment may have a five-year window to build capability and permanently deter a war with Beijing.

Signals emitting from the 20th Party congress of the Communist Party of China (CPC) reveal that Beijing is preparing for a war but is not yet ready for it.

There are five reasons from which a fairly solid conclusion can be drawn that China’s war machine is still a work in progress.

First, Chinese President Xi Jinping who began his third innings in office last month is still in the process of establishing complete control over the People’s Liberation Army (PLA) and the country’s mammoth intelligence apparatus. This exercise is likely to take time.

At the one-in-five-year event, it was evident that Xi was making a herculean effort to establish full control over the Central Military Commission (CMC)—the fulcrum that drives the country’s sprawling security establishment, including the ground forces, Air Force, Navy, Coast Guard and the armed police.

In an effort to enforce his iron grip, Xi has brought in loyalists, not necessarily battle-hardened military professionals in the CMC hierarchy. That shows insecurity and an inward-looking approach right now, rather than readiness for war.

For instance, as CMC chairman, Xi has extended the tenure of General Zhang Youxia, as one of the two Vice Chairmen of the body—a position he has held since 2017. Gen. Zhang is a Xi loyalist, and the bond between the two goes back a generation when Xi and Zhang’s fathers worked with each other. In order to keep Zhang on his side, the President broke the unwritten rule that PLA seniors should retire at the age of 68. Zhang is already 72. 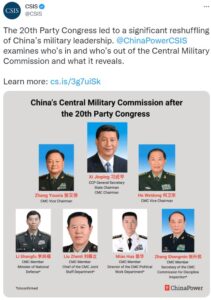 For instance, Admiral Miao Hua of the PLA Navy has known Xi from the time when the two were posted in coastal Fujian Province, where the President at one time served as Governor.

Second, though it is crammed with loyalists, the CMC hierarchy has very few members with combat experience—yet another indication that China is not war-prepared as yet. Only Liu Zhenli and Zhang Youxia have combat experience, having been part of China’s rather infamous war with Vietnam in 1979.

Within the 7-member CMC, Gen. Li Shangfu, is a technocrat, who is likely to hold the post of defence minister. However, he is an aerospace engineer, and has marshalled space launches. He was also the deputy commander of the newly established PLA Strategic Support Force in 2016. It would not be surprising if Xi leverages his experience in expanding China’s strategic missile arsenal to deliver atomic warheads—an inventory that Beijing is likely to expand during Xi’s third term as preparation for war.

Admiral Miao was the head of the CMC’s Political Work Department, a position held since 2017. This implies he has no operational or combat experience, as he was engaged in party and cultural work within the PLA.

However, India may need to keep a close watch on two CMC Vice Chairman He Weidong. Gen. He was reportedly involved in China’s standoff with India at Doklam. Besides, he is said to have considerable experience in the Eastern Theatre Command, which has Taiwan in its cross-hairs. 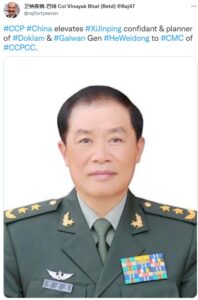 During his address Xi spoke about winning “local wars,” a phrase that is likely to refer to Taiwan and India.

Third, Xi is expected to undertake another round of cleaning up of opposition figures to deepen his control over the PLA. For that General Zhang Shengmin is expected to carry on the PLA purge by heading the CMC Discipline Inspection Commission, whose official task is to eliminate corruption within the military. Engaging in an external war is unlikely unless Xi fully controls all the pivots within the PLA.

Fourth, Xi has stressed the development of modern weapons, a stage below that of using them. Apart from deepening nuclear deterrence, Xi discussed “intelligentization”, or “speeding up the development of unmanned intelligent systems”. This would mean China’s intense focus on building drones, networked systems and joint command and control apart from advanced weapons.

Fifth, Xi has signalled his intent to assume firm control of the vast intelligence community relying on his loyalists. For the first time in decades, the head of the Ministry of State Security (MSS) – this time Chen Wenqing has been inducted in the powerful 24-member Politburo. His elevation means that as the head of the CMC, Xi will be able to affix his personal stamp on China’s entire security apparatus. 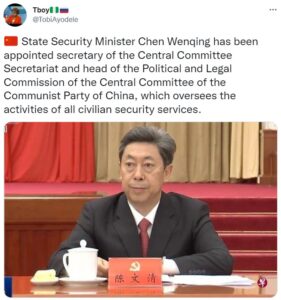 With Xi in full military preparation but time-consuming mode, it is a no-brainer that India has a window, maximum of around five years to build a reliable nuclear deterrent, with an assured second-strike capability as well a conventional deterrent based on critical and home-grown military supply chains that flow from the Atmanirbhar Bharat doctrine.

(This article first appeared in indianarrative.com)