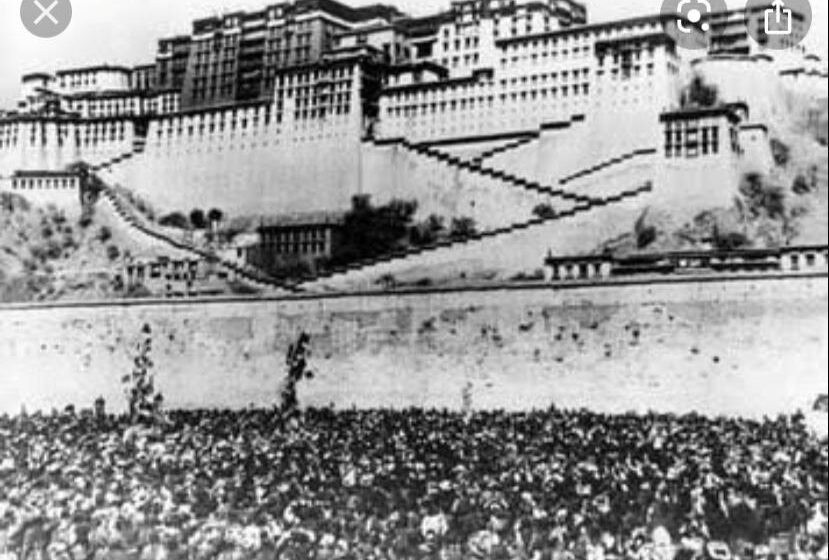 DHARAMSHALA: “Tibet has become a place unimaginable for people living outside China, for every step that you take and every move that you make is censored and could possibly place you in interrogation camps,” said Rigzin (name changed to protect identity) who recently arrived in India from Tibet. He recounted how the authorities there inspected everything from what was being said to what kind of music one was listening to, akin to a large prison where people live in constant fear. For him, sneaking through the borders of Nepal to reach India was the only way to escape Chinese persecution. More than seven decades after the People’s Republic of China’s (PRC) takeover of Tibet, the situation remains grim, with Chinese authorities tightening their control.

For the last 70 years, Tibet has been under heavy surveillance, with the region being heavily guarded by the Chinese. The people of Tibet have been victims of the policies implemented under the guise of “maintaining stability”. Reports of highly intrusive control mechanisms, mass surveillance, 155 self-immolations calling for freedom in Tibet and an increasing number of political prisoners, all point to the aggravating crisis. According to Tenzin Tseten of the Tibet Policy Institute, in an approach to “secure and stabilize” Tibet, Beijing has shifted from a “conciliatory approach” to a “regulatory approach” by upgrading security and surveillance mechanisms within an already existing network of social control and propaganda measures.

Policies implemented in Tibet grossly violate international human rights. For instance, the “The Regulations on the Establishment of a Model Area for Ethnic Unity and Progress in the Tibet Autonomous Region” adopted by the TAR People’s Congress in January 2020 directed authorities to enforce a Chinese-centric way of life with an aim to Sinicize the Tibetan people, their culture and religion. Furthermore, the “Bilingual Education Policy” in Tibet is geared towards reducing the importance of the Tibetan language, the only marker that separates Tibet from China, according to historian Tsering Shakya. Similarly, the emphasis on patriotic education and strengthening the ideological spirit has been highlighted in the seventh Tibet Work Forum (TWF) that was personally convened by Xi Jinping. The United Front Work Department (UFWD) that has gained enormous importance under Xi Jinping plays a central role in ensuring tight control over religion.

Meanwhile, as part of a nationwide programme, the Chinese government declared a “major victory” in alleviating poverty in Tibet. This came with social control and ideological indoctrination, as was revealed in Adrian Zenz’s report. Adrian noted that poverty alleviation is a ‘battlefield’ where Tibetan pastoralists and farmers are subjected to centralized ‘military style’ vocational training with an aim to reform “backward thinking” that includes training in work discipline, law and Chinese language. Xi Jinping’s signature campaign is induced by a coercive scheme—a military style training to “produce discipline and obedience, to transform their backwardness and identity and weaken negative influence of religion”. These invasive mechanisms created by Chen Quanguo, who is popularly known as the architect of the system of mass surveillance and militarization, were later implemented in Xinjiang. The Chinese government’s actions in Xinjiang, which have sparked allegations of genocide and forced labour, have placed Beijing under global scrutiny. However, these allegations have not prevented China from further enforcing policies in Tibet that will engender long-term loss of language, culture, religion and identity.

The severity of the situation inside Tibet has been rightly documented in the Freedom in the World 2021 report, where Tibet is listed as the least free country in the world. The survey conducted by ‘Freedom House’, which made an assessment of political rights and civil liberties, pushed Tibet a notch down, clubbing it with Syria as the worst free country. Tibet and the condition of its people demands a much more active involvement of the U.N. Human Rights Council (HRC). However, the appointment of China as one of the 15 members of the Council in October 2020 flies in the face of the principles enshrined in the U.N. Declaration of Human Rights and raises questions about the organisation’s credibility.

Every year on March 10, Tibetans all over the world commemorate the National Uprising of 1959, when people gathered in Lhasa in order to protect His Holiness the Dalai Lama as well as demand that Communist China end the occupation of their country. This year is no different, with the same yearning for a Tibet that once belonged to Tibetans.

(The author is a fellow of the Tibet Policy Institute and PhD scholar at JNU. Views expressed in this article are personal)