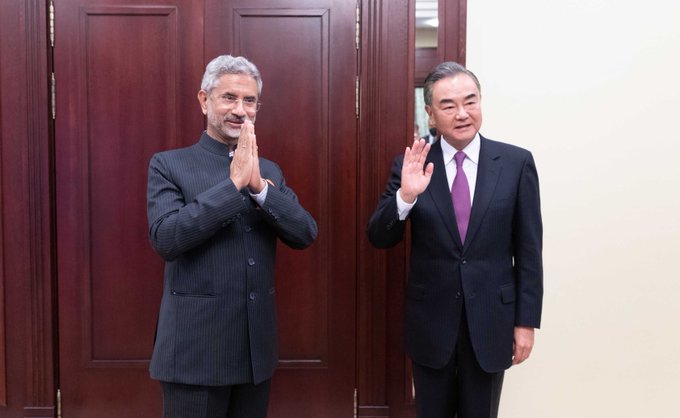 External Affairs Minister S Jainshankar and his Chinese counterpart Wang Yi met in Moscow on Thursday, on the sidelines of the SCO meeting. (Photo: @XHNews)

NEW DELHI: India and China have agreed on a broad roadmap to take relations forward from the current standoff in eastern Ladakh. At the end of talks in Moscow, External Affairs Minister S Jaishankar and his Chinese counterpart Wang Yi issued a five-point joint statement where they agreed on the following:

But even before this statement was issued in Moscow, the Chinese embassy preempted it with a press note making false claims. It attributed to Jaishankar the statement that “India’s policy towards China has not changed,” when it clearly has.

Even more curious, it says “The Indian side does not consider the development of India-China relations to be dependent on the settlement of the boundary question”.

This is again a lie. Jaishankar has said very clearly in his recently released book ‘The India Way’ that “while the centrality of the border has long been recognised, their activities and interests in global politics will now have a great relevance in the overall calculation”.

Another line: “The Indian side is prepared to work with China to ease tensions on the border through dialogue and negotiation”, seems to put the onus on India for the recent breakdown in relations, when it is China which is the first and serial offender.

Some references in the joint statement have also raised doubts. It says the “troops should disengage and maintain proper distance”. Is this an indication that the two leaders have agreed on pulling back their respective forces? If that is indeed the case, India may have conceded ground even though China is the one which created the crisis.

Government sources were later quoted as saying that there is no change in Beijing’s position and no change in the ground situation. India remains committed to finding a diplomatic solution and will not compromise on a single inch of its territory. The top leadership has been apprised of the situation.

Atul Aneja, former China correspondent of ‘The Hindu’, believes this is the best deal under the circumstances. There will be disengagement with both sides withdrawing to their positions before the current crisis. The special representatives of both sides will continue boundary talks even though it is clear the mechanism has achieved very little. There is reference to enhanced CBMs, but India and China are committed to every manner of CBM and these have failed. Perhaps all that is left is satellite imagery that may quiet Chinese insecurities about India’s so called designs on the Xinjiang Tibet highway.

There is little optimism about the future. China will continue its pinpricks after learning lessons from the current standoff. There will be possibly greater coordination with Pakistan on making life difficult for India, whether in Kashmir or elsewhere. India and China appear to have postponed the day of reckoning.