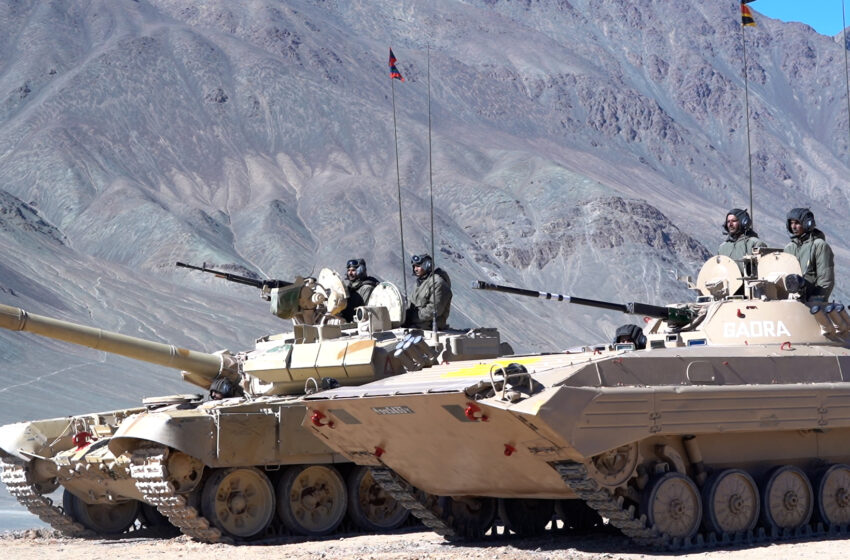 NEW DELHI: “I want to assure this House that in these talks we have not conceded anything.” Defence Minister Rajnath Singh’s assurance in Parliament on February 11 encapsulated India’s tough stand during the prolonged and difficult negotiations with China over the nine-month-long standoff in Ladakh.

Multiple stakeholders involved in the negotiations reveal the constant battle of nerves that was fought across the table during nine rounds of negotiations with the Chinese, initially by the 14 Corps Commander and his team and in later months in association with the joint secretary handling China in the Ministry of External Affairs.

The result: A rare written document about the disengagement process detailing sequential steps, distance and place to which heavy armour and weapons platforms would be withdrawn in phases, also how and when negotiations over the remaining friction points in Ladakh would take place.

“Patience is the key in negotiating with the Chinese. We realised this early. So despite tremendous pressure from critics and detractors to get an agreement at the earliest, we never succumbed,” revealed a key participant in the process. For instance, in the seventh round the Chinese proposed a formula whereby they would withdraw to their post at Sirijap (east of Finger 8) but wanted to patrol up to Finger 5 at least once a month, while confining India to Finger 3. India refused the bait. “We kept chipping away at their proposals and putting forth counter-demands. We said we will not vacate the heights on the south bank of Pangong Tso until they agreed to pull back completely to Sirijap,” the official said.

Eventually in the eighth and ninth rounds, the Chinese conceded but wanted an immediate disengagement of armour at the Chushul heights in return. Looking at China’s softening stand, India pressed harder and asked for creation of a no-patrolling zone in the area between Finger 3 and Finger 8 until military and diplomatic discussions were held to find a permanent solution.

For India, this was acceptable for two reasons: One, this would mean the Chinese had to vacate the area they were occupying between Finger 3 and 8 since May 2020. This was the restoration of status quo ante pre-May 2020 on the north bank of Pangong Tso that India wanted. The creation of a no-patrol zone was temporarily acceptable to India since India foot patrols used to go up to Finger 8 around once in two months (because of lack of road from Finger 3 to Finger 5 on the Indian side) while the Chinese could come up to Finger 5 swiftly and frequently since they had managed to build a road from Finger 8 in the 2000s (after starting to lay a track in 1999).

On the south bank, India had indeed taken the Chinese by surprise on August 29-30 by outracing them to the heights in the Chushul sub-sector. First Indian infantry climbed the peaks at Gurung Hill, Magar Hill, Mukhpari, Rezang La and Rechin La and then Indian armour was deployed at those heights before China could react. Subsequently, the Chinese also managed to get their main battle tanks (T-96s) on the reverse slopes of these peaks. This unprecedented face-to-face deployment of tanks (barely 100 feet apart) was like sitting on a tinder box. Militarily, it was not a situation that could be sustained indefinitely by either side. So Indian interlocutors, seizing the opportunity, used the south bank deployment as a leverage to get what it wanted on the north bank as part of a practical solution.

The final verbal agreement was reached on January 24, according to sources. India wanted the agreement to be put on paper and ratified by the higher authorities. The Republic Day celebrations and engagements followed by the pre-occupation of the Indian military brass with the Aero India show (between February 3 and 5) in Bengaluru pushed back the implementation of the agreement. India gave the go-ahead to the agreed text on February 8. The Chinese sent back a written document on February 9, signed it on the morning of February 10 and started to withdraw heavy armour from the peaks in Chushul immediately. By the evening of February 11, over 200 Chinese tanks were back to Rutog military base, some 90-100 km from Moldo. “It appeared as if the Chinese were in a hurry to complete the disengagement quickly, perhaps because the Chinese New Year begins today (February 12),” sources said. India, meanwhile, pulled back its tanks to Loma, a small hamlet near Nyoma.

However, much remains to be done in the next few weeks. Discussions on other friction points like Depsang, PP 17A and so on will take place soon, sources added, as detailed by the defence minister in his statement in Parliament. “The House should also know that there are still some outstanding issues with regard to deployment and patrolling at some other points along the LAC in Eastern Ladakh. These will be the focus of further discussions with the Chinese side. We have agreed that both sides should achieve complete disengagement at the earliest and abide fully by the bilateral agreements and protocols. By now, the Chinese side is also fully aware of our resolve. It is therefore our expectation that the Chinese side will work with us in full sincerity to resolve these remaining issues,” Rajnath Singh told Parliament on Thursday.

India’s move to link other aspects of the relationship—economic, political and diplomatic—to the situation on the border also appears to have had a bearing on Beijing’s approach to the solution in Ladakh. By banning Chinese apps and ordering greater scrutiny of Chinese investment in India, New Delhi sent a stern message to China that it is willing to risk its commercial and trade ties if the border situation did not improve. “Any serious disturbance in peace and tranquility along the LAC in the border areas is bound to have adverse implications for the direction of our bilateral ties. The Chinese side is well aware of our position. In fact, various high level joint statements have acknowledged this point that maintenance of peace and tranquility along the LAC in the border areas is a fundamental premise for development of relations,” Rajnath Singh asserted in Parliament.

Meanwhile, to a question about the possibility of Chinese forces occupying the Chushul heights after India vacates it, military sources pointed out that India has put in place efficient ISR capabilities that would alert troops stationed at the base of Chushul mountains. The newly installed sensors and surveillance platforms will allow Indian troops to move up to the peaks if any Chinese misadventure is detected.