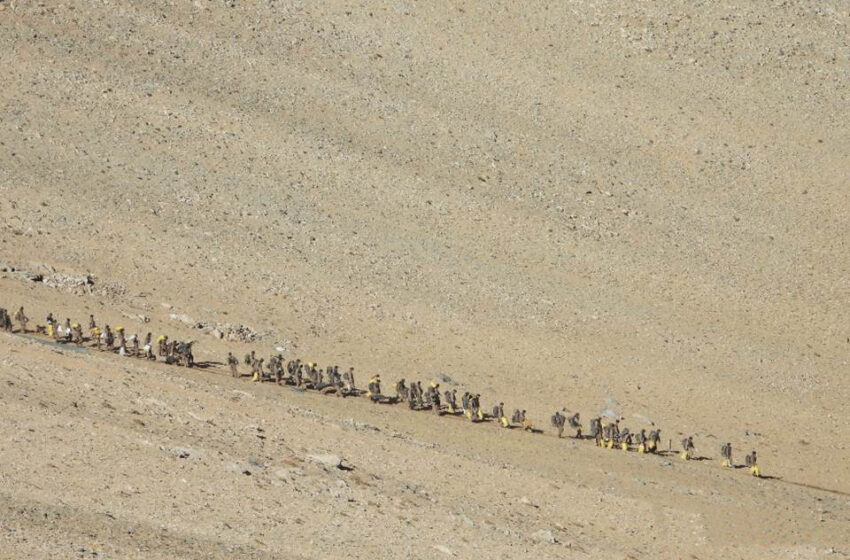 PLA soldiers making their way back to rear areas after first phase disengagement.

NEW DELHI: No dates have been finalised or other details worked out for any SR (Special Representatives)-level talks between India and China since India’s current focus is on restoring the status quo ante in Ladakh as it existed in April 2020. Sources close to India’s National Security Adviser (NSA) Ajit Doval told StratNews Global that there is no plan as yet for the SRs to meet in order to take the discussion on the boundary or even on the LAC to the next level.

The SR mechanism is a platform that has evolved over the years for discussion far beyond the boundary, sources pointed out. Doval and Chinese Foreign Minister Wang Yi are respective Special Representatives from India and China.

On Sunday, the 10th round of Corps Commander level talks on further disengagement process in Ladakh may have ended inconclusively but India and China have committed themselves to continue with the talks demonstrating the commitment made by both sides on the roadmap to defuse the nine-month-old crisis along the Line of Actual Control (LAC) in Ladakh. “The two sides agreed to follow the important consensus of their state leaders, continue their communication and dialogue, stabilize and control the situation on the ground, push for a mutually acceptable resolution of the remaining issues in a steady and orderly manner, so as to jointly maintain peace and tranquillity in the border areas,” a joint statement issued on February 21 said.

Government sources say Indian interlocutors led by the 14 Corps Commander have done a tremendous job so far and Indian decision makers would like this process to continue so as to achieve stability on the LAC in the Western Sector (Ladakh) before SR-level discussions are held, the sources added, scotching reports alluding to the possibility of an early Doval-Wang meeting.

The SR-level arrangement was instituted in 2003 under then Prime Minister Atal Bihari Vajpayee. In the last meeting of the SRs, both sides reiterated the need to “maintain peace and tranquility in the border areas for the overall development of the bilateral relationship pending final settlement of the boundary question.”

The last in-person meeting of the SRs (22nd round) was held in December 2019, five months before the Ladakh standoff. Doval and Foreign Minister Wang Yi had underscored the importance of approaching the boundary question from the strategic perspective of India-China relations and agreed that an early settlement of the boundary question serves the fundamental interests of both countries. An MEA press note said: “The SRs resolved to intensify their efforts to achieve a fair, reasonable and mutually acceptable solution to the India-China boundary question in accordance with the directives provided by PM Modi and President Xi Jinping.”

It said: “Both sides recognised the importance of confidence-building measures to promote exchanges and communication between the border personnel to ensure predictability in border management as well as strategic communication. They also agreed to work together for more CBMs.” It was also agreed that the next round of SR-level talks would be held in China.

However, on July 6, 2020, Wang and Doval held a virtual conversation in the midst of the current crisis. According to the MEA statement in July 2020, Doval and Wang agreed that it was “necessary to ensure at the earliest complete disengagement of the troops along the LAC and de-escalation from India-China border areas for full restoration of peace and tranquility”. They agreed that the ongoing process of disengagement should be completed “expeditiously”.

There were also similar phrases in both the statements that referred to the consensus reached by the leadership on the fact that differences should not be allowed to escalate into disputes. Clearly, going by the statements issued at the end of the virtual meeting last July, unless the current round of discussions at the military level manages to resolve the remaining friction points in eastern Ladakh and enforce disengagement at those points like on the north and south bank of the Pangong Tso, it is difficult to envisage another in-person SR level meeting.

It is important to note, however, that this is perhaps the longest gap between any two rounds of discussions at the SR level since the inception of this mechanism.