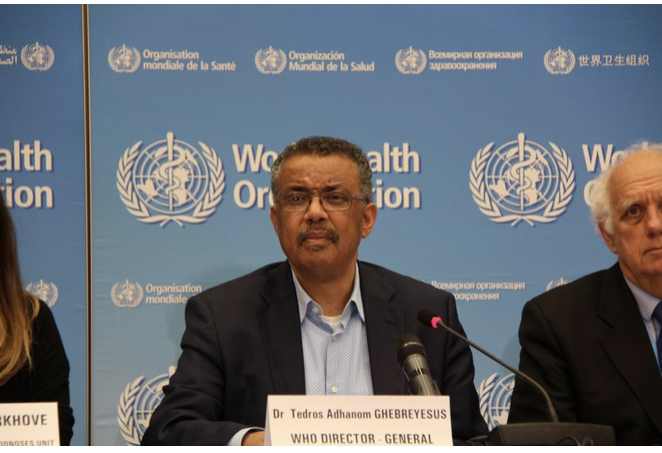 World Health Organization (WHO) Director-General Tedros Adhanom Ghebreyesus (centre) at a press conference at the WHO headquarters in Geneva, Switzerland. (Photo: Xinhua/Liu Qu)

GENEVA: The World Health Organization (WHO) on Thursday said it was too early to declare the outbreak of the novel coronavirus in China a public health emergency of international concern (PHEIC), while warning that the number of cases may rise as much about the virus remains unknown.

“I am not declaring a public health emergency of international concern today. As it was yesterday, the Emergency Committee was divided over whether the outbreak of novel coronavirus represents a PHEIC or not,” WHO Director-General Tedros Adhanom Ghebreyesus told a press conference after a closed-door meeting of the committee.

“Make no mistake, though, this is an emergency in China. But it has not yet become a global health emergency. It may yet become one,” Tedros said, adding that WHO’s risk assessment is that the outbreak is a very high risk in China and a high risk regionally and globally.

“I wish to reiterate that the fact I am not declaring a PHEIC today should not be taken as a sign that WHO does not think the situation is serious, or that we are not taking it seriously,” said the chief of the global public health watchdog.

The UN health agency extended its Emergency Committee discussions on whether to declare a PHEIC from Wednesday to Thursday. The PHEIC is defined as an extraordinary event that is determined to constitute a public health risk to other states through the international spread of disease and to potentially require a coordinated international response.

Tedros said that 584 cases had been reported to WHO, including 17 deaths. A total of 575 of those cases and all of the deaths have been reported in China, with others in Japan, South Korea, Singapore, Thailand, the United States and Vietnam.

Tedros said China has taken measures it believes to be appropriate to contain the spread of coronavirus in the central Chinese city of Wuhan, where the first and most cases were reported, and other cities, and WHO hopes that they will be both effective and short in their duration.

For the moment, WHO does not recommend any broader restrictions on travel or trade. It recommends exit screening at airports as part of containment measures. All countries should have in place measures to detect cases, including at health facilities, Tedros said.

“It is too early to consider this event is a public health emergency of international concern,” said Didier Houssin, chair of the Emergency Committee and an adviser to France’s national health security agency.

Michael Ryan, executive director of the WHO Health Emergencies Program, told reporters that compared to past incidents, one of the important advantages right now in dealing with the novel coronavirus is that people know the virus and have diagnosed it.

Tedros told reporters that the virus causes milder symptoms for most people and a quarter of patients have developed severe disease. There is human-to-human transmission in China but for now it appears limited to family groups and health workers caring for infected patients, he said.

“The disadvantage is the unknowns, in not fully understanding the disease, the severity and the transmission,” said Ryan.

According to Tedros, the source of the coronavirus, how it spreads and its clinical features or severity are among the unknowns. “It is likely that we will see more cases in other parts of China and other countries,” he said.

Ryan said the death toll may rise while noting the situation may develop in another way: more mild cases detected with the fatality rate down. “We need to focus on early diagnostics, early support of care, intensive care where need it.” Ryan said that the detailed information provided by China frankly has enabled the WHO to construct the epidemic curve and track on a daily basis. “We are very grateful for that,” he added. At this point, the outbreak is still evolving. “We are not at the position to say the epidemic’s peak,” said the expert.

The WHO Emergency Committee called for support for ongoing efforts to investigate the animal source of the outbreak and the extent of human-to-human transmission, the screening efforts in other provinces of China and the enhancement of surveillance for severe acute respiratory infections in these regions, saying containment and mitigation measures should also be reinforced.

In a statement issued after its meeting, the committee also expressed the hope that China will continue to share information and collaborate with WHO and partners to investigate the epidemiology and evolution of the coronavirus outbreak.

It said exit screening is needed at international airports and ports in the affected Chinese provinces and at domestic airports, railway stations and long-distance bus stations.

Meanwhile, the committee urged all countries to be prepared for containment, with measures including active surveillance, early detection, isolation and case management, contact tracing and prevention of the onward spread of the infection, and to share full data with WHO.

Countries should emphasise the reduction of human infection and prevent secondary transmission and international spread, said the statement.