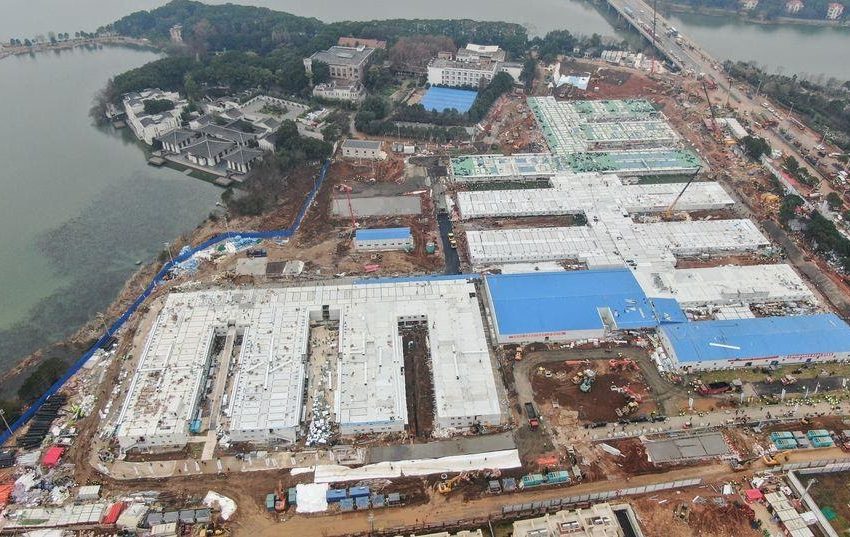 WUHAN (CHINA): China has built a makeshift hospital in 10 days to battle against the novel strain of Coronavirus in Wuhan, the epicentre of the virus outbreak in central China’s Hubei Province. Huoshenshan (Fire God Mountain) Hospital was delivered Sunday.

A total of 1,400 medical staff from the armed forces is tasked with treating patients in Huoshenshan Hospital starting from Monday. The medics consist of 950 people from hospitals affiliated to the People’s Liberation Army (PLA) Joint Logistic Support Force and 450 from medical universities of the army, navy and air force of the PLA who were sent to Wuhan earlier.

Chinese health authorities on Sunday said they received reports of 2,590 new confirmed cases of novel Coronavirus infection and 45 deaths on Saturday from 31 provincial-level regions and the Xinjiang Production and Construction Corps. All the deaths are in Hubei Province, according to China’s National Health Commission.

When Fang Xiang knew he and his team had to finish the hospital in Wuhan in 10 days, he thought it was “mission impossible”. “For a project of this scale, it usually takes at least two years,” said Fang, project manager of the Third Construction Co. Ltd of China Construction Third Engineering Bureau. “It takes at least a month to construct a temporary building, not to mention a new hospital for infectious diseases”.

In addition, with a big number of migrant workers partaking, it is difficult to provide adequate food and shelter on-site, according to a staff member of Wuhan Urban and Rural Construction Bureau.

But the “mission impossible” had to be implemented under severe circumstances. From January 23 to February 1, Wuhan’s confirmed cases of infection rose from 495 to a staggering 4,109. This has put huge pressure on local medical facilities, which failed to supply enough beds. A good many patients had to stay home for quarantine and treatment. If not handled properly, the epidemic could exacerbate.

Located in a sanatorium near Zhiyin Lake in southwestern Wuhan, the hospital is far away from downtown areas where people converge. The area has sufficient transportation and pipeline systems, and existing dining halls and dormitories are ready to provide services.

“I have never participated in such an urgent task and I have never seen so many companies involved in a single project,” said Fang Xiang’s colleague Shen Kai. “It is a tough job but we need to give it our best shot.”

Thousands of workers operated more than 800 equipment simultaneously as they rushed against time to save lives. They vowed to fight against the virus and worked in shifts to complete the construction. Some people only slept for four hours a day, Shen said.

Ma Jiaqiang, 47, volunteered for the project when he read about the recruitment ad for Huoshenshan Hospital on social media. “I have been working in Wuhan. It is my home,” Ma said. “I just had to take part.” Ma operated a digging machine for eight hours a day at the construction site. “I feel honoured to be able to be part of this,” Ma said.

After the hospital work began, the Chinese public went out of their way to supervise the construction of Huoshenshan. China’s state broadcaster has been live-streaming the around-the-clock construction progress, which instantly went viral online. With no narration or background music, the livestream videos provide audiences a real-time bird’s-eye view of the construction site.

Calling themselves “online supervisors”, Chinese citizens have been keeping a close eye on the projects and exchanging their ideas and feelings in the comment section. They cheered when the hospital was delivered. “Cheer up, China! I believe we can curb the epidemic,” read a typical online comment. “Salute to the workers working around the clock,” read another comment.

The project is bringing hope to patients like Zhang Yue, a Wuhan resident, who has been suffering from fever for days. “It feels like seeing the sunlight shining through the dark clouds,” Zhang said.