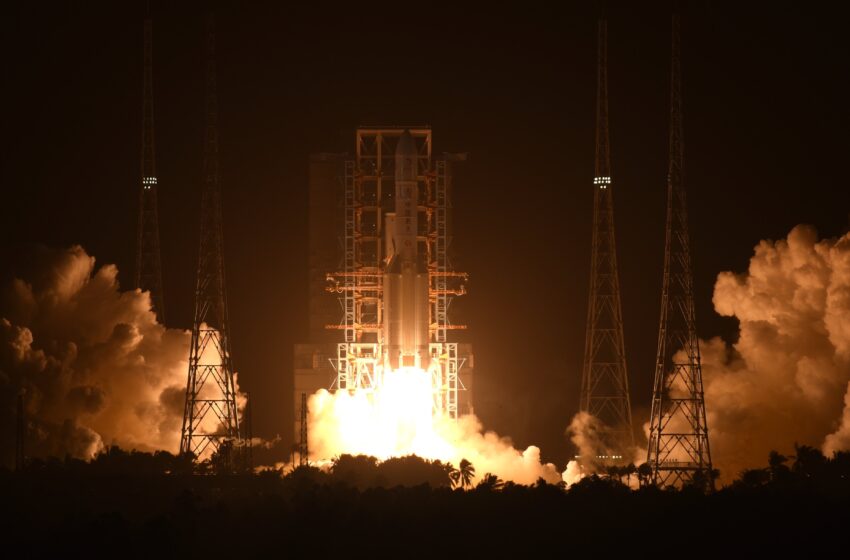 NEW DELHI: On 24 November 2020, China launched one of the most ambitious space missions undertaken by it all these years. The Chang’e-5 mission to the Moon is a robotic mission with the goal of drilling through the Moon’s surface to a depth of around two meters, collecting 2 kg of rock and soil samples and sending the material back to Earth. Only the Soviets have succeeded in this before: in 1976, the Soviet Union’s robotic Luna 24 mission brought back around 170 grams of soil from the lunar surface. The U.S. has not done any sample return mission to the Moon although its Surveyor 7 unmanned craft landed on the lunar surface in January 1968 to send back high resolution images (seen as preparation for a manned mission).

The Chang’e-5 mission will last 23 days. The rocket for this mission is the Long March 5 which is carrying four robotic spacecraft: an orbiter, a lander, an ascender and a return craft. The mission is full of challenges: the first is to successfully enter lunar orbit. China has already done four missions in the past and has adequate experience but the mission load is the biggest ever.

Once in lunar orbit, Chang’e-5 will separate: the orbiter-returner combination will keep station about 200 km above the Moon’s surface whereas the lander-ascender combination will descend to the surface, wait 48 hours until the dust raised during the landing settles down, make observations of the surface and environmental conditions, after which the robotic arm will start the process of drilling and collection of samples. The soil samples will be emptied into an airtight box and the ascender (with the box) will take off and dock with the orbiter-returner. Here, the sample box will be transferred to the return craft which will then begin the journey home.

Irrespective of whether the mission fails or succeeds, it needs to be acknowledged that today China’s space programme ranks among the top in the world. A few decades back, China and India’s space programmes were at the same level of competence and there was talk of an ‘Asian space race’ between these two and also Japan. There was also a view that India and China were getting considerable help from the Soviet Union/Russia while Japan was being helped by the United States. While there is some truth in this, one cannot take away the efforts of space and rocket scientists of these three countries.

India was about a decade behind China in the domain of indigenously developing and testing a satellite launch vehicle. China demonstrated its capabilities in this field in 1970 (as did Japan), while India did it in 1980. While each of them have separate space agendas in terms of what they wish to achieve, during the early phase their space programmes were somewhat comparable with China having an edge in some fields. Nevertheless, China leapfrogged ahead, working methodically. China was able to launch heavier satellites into space owing to their Long March series of launchers. They also made rapid progress in meteorology, communications and earth observation.

There were some failures, notably in 2017 when the Long March 5 rocket had a major failure, delaying the Chang’e-5 mission. Otherwise, the sample-return mission would have rocketed into space three years ago.

There was a time in 2007/2008 when India, China and Japan kicked off near simultaneous Moon projects. Their on-board sensors and systems were comparable in some respects. These and other missions have boosted national pride and raised their stature internationally. While Japan is yet to attempt its second mission to the Moon, India’s second Moon mission (2019) was a partial failure. China, on the other hand, has forged ahead. The second mission, Chang’e-2, was an orbiter mission (2010) which collected useful data for future missions. Chang’e-3 included a lander and rover (2013) and successfully soft-landed on the Moon. Chang’e-4 (2018/19) was also a successful lander and rover mission. Most of these missions have lasted beyond their programmed lifetime, helping China to build an impressive volume of data. China has also put in place a very successful human space programme. In 2003, the first Chinese astronauts flew into space in a ‘Made in China’ craft. They have also undertaken few space-walks and performed space-docking manoeuvres.

Japan sends its astronauts to the International Space Station since it is part of this 16-nation project. India is likely to send its first astronaut into space only by 2022 in a ‘Made in India’ spacecraft. Technically, Rakesh Sharma was India’s first astronaut who flew into space, courtesy the Russians, in a Soyuz spacecraft in April 1984.

China has already begun the process of building its own space station which is likely to be completed next year. It is building on the success of two space stations, Tiangong-1 & 2, that are no longer in service, both coming down and burning up in the atmosphere. Now a third 60-metric-tonne space station is in the works, which is expected to support three astronauts for long-term habitation. ISRO is working on some plans for a space station but it will take some years before these plans fructify.

China has had remarkable success with its global BeiDou Navigation Satellite System, which has not only provided strategic advantages but delivered a measure of commercial success also. India, on its part, has finished launching all the satellites required for its regional navigational system called Navic. However, the programme is not yet fully operationalised.

The question is, how has China made such good progress in such a short period? Collaboration with NASA was not an option since the U.S. saw China as an ideological adversary. Did Russia help? The answer is yes and no. Initially, the Soviets did assist China in the space domain and there were uncorroborated reports of China ‘reverse-engineering’ Russian rocket and satellite technology. However, it is very clear that after the disintegration of the Soviet Union, Russia found it very difficult to take forward the space agenda with the same zeal as during the Cold War period. They faced significant financial challenges and there were reports of corruption in the space agency. Also, owing to age and other reasons, the older generation of space scientists and rocket engineers slowly faded from the scene. Russia was not able to keep its promise to ISRO about the second mission to the Moon.

Also, it helped that China’s space programme is under the People’s Liberation Army (PLA), which sees space as a strategic domain. So there is significant budgetary support from the military. China is also witnessing mesmerising growth in science, from biotechnology to 5G and quantum commutations. The overall science and technology infrastructure (including universities) created in the country has helped the space community. Many Chinese rockets scientists have been trained in the West and have considerable experience of working on major projects. Chinese engineers and scientists settled abroad also probably share their knowledge and ideas with their counterparts back home on an informal level.

China is well aware of the soft power significance of space and, more than that, sees huge commercial opportunity in the global space market. It is also important to factor in their capabilities in various space fields, from launch vehicles to communications and remote sensing satellites to quantum satellites to the successful commercial exploitation of space technologies. For a country derided as opaque in its business practices, the Chinese have been found to be more open about sharing details of their space programme with the rest of the world. Many probably see the ‘rise of China’ as complete when they dominate the technology landscape. For them, their accomplishments in space have huge value in terms of optics. In the near future, if they are able to land a man on the Moon before the U.S., then undeniably in the eyes of the world, their technological supremacy becomes obvious.

(The author is Senior Fellow at the Manohar Parrikar Institute for Defence Studies and Analyses in New Delhi. Views expressed in this article are personal.)