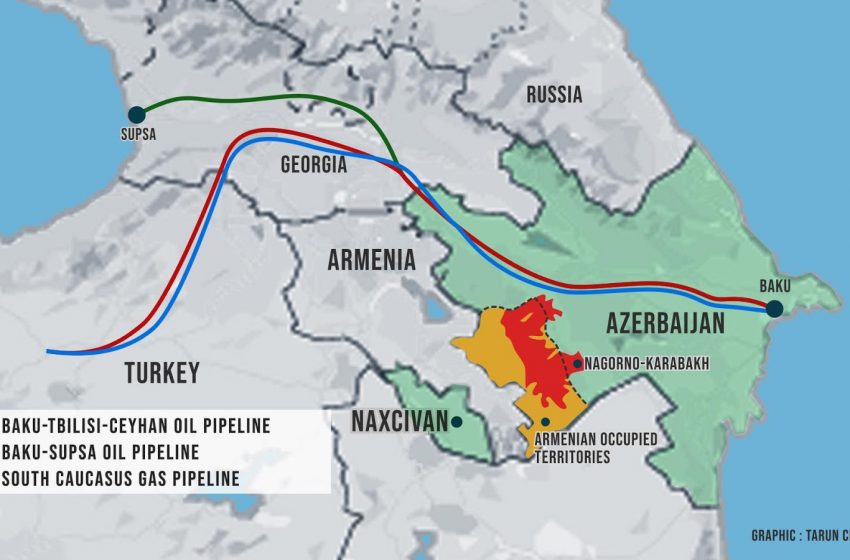 PUNE: There are very few modern-day wars that have ended decisively. The shining example of one which did is the 1971 Indo-Pak war for the liberation of Bangladesh. The Azerbaijan and Armenia conflict for the independent region of Nagorno-Karabakh (NK) has now become the second example of a decisive war. Last week, the Nagorno-Karabakh conflict came to an end with Azerbaijan having won a clear victory with the fulfilment of its aims, both political and military. When I wrote the first piece on the same subject for StratNews Global , the conflict was still raging and there were no clear signs of a likely winner. In the weeks that followed, the Azerbaijan armed forces used a mix of technology and tactics to gain a stellar victory. This article tries to analyse how Azerbaijan could achieve this impossible feat.

For readers who are unaware of the background of the conflict and history of the region, it would be beneficial to read the first part of the article which details the genesis of the problem and the countries aiding the principal warring factions.

Events At The End Of The Conflict

The latest round of fighting between Armenia and Azerbaijan began on September 27 and came to an end on November 10, when both parties accepted a Russia-brokered ceasefire in which Armenia ended up losing everything it had before the conflict in the Nagorno-Karabakh (NK) enclave. The terms of a ceasefire agreed upon by Armenia had the following stipulations: All territory in control of respective sides at the end of the conflict to remain with them. Besides, all Azerbaijani territory captured in the 1994 conflict in the NK enclave by Armenia to be returned to Azerbaijan. A 2000-strong Russian peacekeeping mechanised force will stay in NK for a minimum period of five years along the line of contact between two armies and the Lachin corridor (a piece of land which connects NK with Armenia). Also, Armenia will guarantee a safe corridor for Azerbaijan in the south of Armenia for passage from Azerbaijan to the Nakchivan Exclave which is a piece of Azerbaijan territory to the west of Armenia.

The ceasefire agreement is heavily stacked against the Armenians. They lost the territories and the control of the enclave. They also lost control of the southern border of NK with Iran, which will be a significant loss as Iran is an Armenian supporter. The provision of the safety corridor for the Azerbaijanis in the south would remain a continued reminder of their defeat. The Russians would now govern the leftover enclave of NK. If these terms are not draconian, we will need to revisit the terms imposed on Germany under the Treaty of Versailles at the end of World War One.

The loss to life and property has been immense. Both sides have suffered in this 42-day war. Azerbaijan has had its share of damage and casualties. The numbers are not yet confirmed as both sides have yet to confirm their dead and wounded. As this article is being written, scores of Armenians who were residents of the lost territory are packing their belongings and moving to Armenia. The anger was so deep amongst the Armenians that they adopted a scorched-earth policy as they left their houses and land. Houses were burnt to prevent the other side from using it. The anger in Armenia was so volcanic that protesters hit the streets and demanded the resignation of Prime Minister Nikol Pashinyan. The public stormed parliament and nearly beat the Speaker to death. Their question was: why did the government surrender to the Azerbaijanis?

How Did Azerbaijan Win The War?

Why did Armenians give up the NK enclave and were subjected to such a humiliating defeat? That is the question everyone in Armenia is asking. The answer to this question lies in another question: How did the Armenian military forces (Armenia and Artsakh) get beaten by Azerbaijan so conclusively?

In the 1994 war, Armenia was the superior force as they were well trained, better armed and equipped. The Azerbaijani army was like a ragtail force in front of them, hence their overwhelming success. The author had mentioned in the last article that while Armenia remained a struggling economy, Azerbaijan became an oil-rich economy with oil revenues far more significant than their previous earnings. The Azerbaijanis have wisely used the extra oil money to modernise their armed forces. They have been the recipient of arms from Turkey, Israel and Russia. They bought state of the art weapon systems and the world was happy to provide, for Azerbaijan had the money and it is the hub of oil pipelines originating from the Caspian Sea into Europe. Thus, the loss of Azerbaijan would be an economic disaster.

On the contrary, the Armenians were happy with the status quo. They did not make commensurate efforts to upgrade themselves, happy with a treaty with Russia to provide them protection in case of an external invasion. While the Azerbaijanis were planning for a long time for a decisive battle, Armenians were complacent about their invincibility.

Apart from the above, the battle-winning factor for Azerbaijanis was the use of force multipliers: the use of unmanned drones. They transcended their utility to become the major battle-winning factor. Both sides started the conflict with conventional forces. The Azerbaijanis were the attacking side as they coupled their ground forces with armour, artillery, drones and loitering ammunition. The use of MRLS (Multiple Rocket Launching Systems), the Smerch and Grads were the principal destroyers of the civilian infrastructure from the Armenian side. Armenia accused Azerbaijan of using cluster bombs now under the banned regime by most international organisations. The effect of artillery bombardment was felt beyond the NK enclave borders and the damaging effects of weapons crossed international borders, with Iran and Georgia also bearing some of the brunt.

During the last months of preparation, Azerbaijani forces equipped themselves with unmanned drones from Turkey and Israel. These were the Turkish Bayraktar TB2, and the Israeli-made IAI Harop, kamikaze drones. The use of unmanned kamikaze drones to take out the early warning and air defence radars of the Armenians by the Azerbaijani forces came as a major tactical victory. It rendered the Armenians defenceless against a small and signature-less aerial platform which took on any target including the soldier in the trenches. The bigger Bayraktars destroyed the Armenian tanks, artillery and missile systems. The magnitude of destruction on the Armenian side was so large that once the offensive began in the south, the Azerbaijani forces captured the second largest city of Shusha within two weeks. Once Shusha was captured, protecting the Stepanakert, the capital city of NK, was untenable as the Azerbaijanis were overlooking it from the higher ground of Shusha. This tactical advantage with Azerbaijani forces compelled the Armenians to agree to a ceasefire. The President of Artsakh, Arayik Harutyunyan, stated: ‘If the fighting continues a little longer we would lose the entire enclave in a matter of days with heavy civilian casualties.’ The Armenian Prime Minister reiterated by stating ‘Defeat was unavoidable due to deep analysis of the military situation.’ Ultimately the critical destruction of command and control systems of the Armenian military forces caused by the unmanned drones led to the surrender and a humiliating defeat for the Armenians.

The losses suffered by Armenia are unbelievably large. They lost 186 tanks, 91AFVs/IFVs, 147 towed artillery pieces, 19 self-propelled pieces, 73 pieces MRLS and much more. The list is long, and this is corroborated through video evidence by an American blogging site called ORYX. Destruction of this magnitude in such a short time is unheard of. Thirty per cent destruction of manpower or equipment of a fighting unit renders it ineffective in the battlefield, and the unit is withdrawn to the rear for regrouping and re-equipping. By this measure, Armenians must have lost roughly 12 battalions of armour, 25 battalions of artillery, rendered out of action. That is a considerable number. The above is an arithmetic calculation to put to the reader the assessed quantum of damage. Even if the numbers are half of what has been calculated, it is enough to cause a major setback to a fighting force, and that is the reason the Armenians had no other option than surrender. The Azerbaijani forces, based on the assessment of the same blogging site, have recorded only one-sixth of the damage/destruction.

If reports from the frontlines are to be believed, the majority of this damage was a result of the use of unmanned drones. It was the ‘gunpowder moment’ for the Armenian forces, as they found themselves defenceless against an invisible enemy lurking on top of their heads, waiting to pounce. Are unmanned armed drones so devastating? In my opinion ‘no’. Are they cost effective? ‘Yes’. However, this needs to be war-gamed. India has acquired only a small quantity of unmanned armed drones but it is believed that the Indian Air Force is in the process of acquiring the same Israeli kamikaze drones. The Indian Air Force is also drafting a drone policy (as of today, one does not exist). The availability of unmanned armed drones to China and even Pakistan in the future would be a matter of concern till we wargame a suitable defence mechanism. The use of drone in NK conflict and, the example of the drone attack of Aramco, the southern oil fields of Saudi Arabia and its complete destruction, necessitates a new thought on how battles will be fought in the future.

The Russians are enforcing the ceasefire in NK and the Russian peacekeeping force has established itself in the enclave. The withdrawal of population and handing over of the territory as per the ceasefire agreement would take time, and the Armenians have up to December 1 to complete the same. It would get extended in all probability. The Russians mean business and they would enforce the ceasefire for the coming five years. However, the Armenians would never forget this humiliation and the burning desire for revenge would fester, albeit latently, till another opportunity surfaces. For the sake of the people and region, lasting peace and a just political solution need to go hand in hand. Hopefully, Armenia and Azerbaijan along with Russia, Turkey and Iran have reached that equilibrium to ensure peace. Even if one of these parties is dissatisfied, permanent peace will take a long time to come.