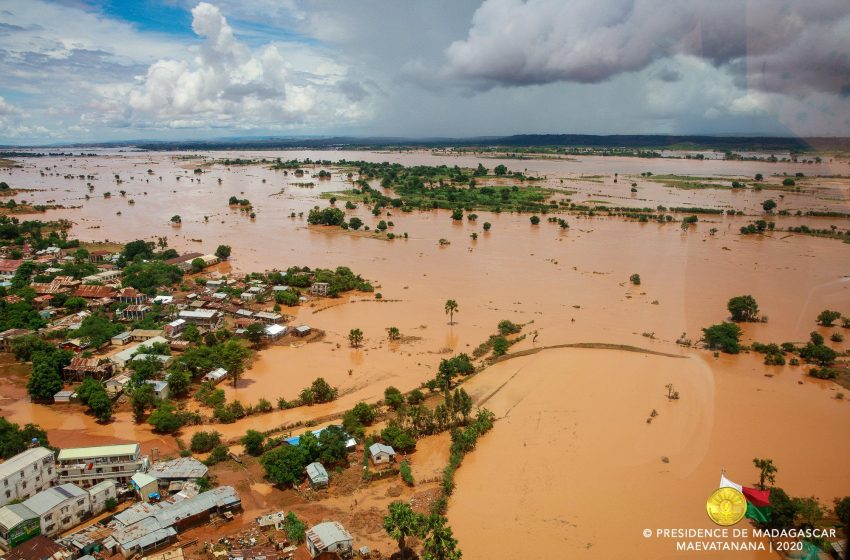 NEW DELHI: The cyclonic season in southwestern Indian Ocean has been unusually harsh for the island nation of Madagascar where a national emergency has been declared following flash floods and torrential rain. European Commission’s Directorate-General for European Civil Protection and Humanitarian Aid Operations reported on Monday (January 27) that over the past week, heavy rain, strong winds and flooding caused by a tropical storm have affected 116,675 people, with over 16,000 displaced and at least 32 dead in seven regions of northern Madagascar. The full scale of the disaster is still unfolding in one of the world’s better known biodiversity hotspots.

Madagascar, Indian Ocean’s largest island nation, often experiences heavy rain and tropical revolving storms in the cyclone season which could last up to six months. This year, the rain has been particularly severe, washing away roads in the country’s northwest and completely severing the road connectivity to many villages, including the town of Marovoay, with 20,000 inhabitants. The Malagasy government declared a State of Emergency on January 24 and activated the humanitarian response, led by the National Committee for Disaster Risk Reduction (DRR). Boeny, Betsiboka, Sofia and Alaotra Mangoro regions are the worst-hit, according to the Government’s National Disaster and Risk Management Office. Pictures on social media showed President Andry Rajoelina leading the search and rescue efforts organised by the military and appealing for solidarity and national unity in face of the natural disaster. “We need international mobilisation for this major natural disaster”, he Tweeted, in response to a social media post of an international organisation Programme des Nations Unies pour le Developpment a Madagascar, highlighting the serious situation.

The Malagasy Ministry of Defence has pressed into service numerous military personnel and assets, including rescue boats and some light helicopters. As per reports, the Ministry in charge of Public Works has started repairing damaged roads, reopening the national highways 4 and 6. However, access remains a big challenge, particularly to Alaotra Mangoro Region and other areas isolated by flooding. The government’s resources to provide relief are scarce in this impoverished nation, which has recently acquired a modicum of political stability, after years of unstable governance. At present, a consensus government, led by President Andry Nirina Rajoelina and Prime Minister Christian Louis Ntsay has been in charge since 2018. Madagascar counts among the least developed nations and its institutions remain underdeveloped due to past political instability and corruption.

Madagascar has traditionally received support from the European Union and France, the former colonial power which ruled Madagascar till 1975. However, Madagascar is increasingly looking at other partners for support, including India and China. China has actively courted Madagascar over the past few years, increasing the presence of Chinese companies in mining, lumbering and fisheries businesses. In 2018, India’s President Ram Nath Kovind went on a state visit to Madagascar, which helped strengthen ties. He handed over a cheque for US $2 million to the Madagascar National Office for Management of Risk and Disaster Relief as India’s contribution towards disaster relief. India and Madagascar have also concluded an agreement on defence cooperation, which makes it easier for the two nations to coordinate during major disasters like the present one, when participation of militaries in humanitarian assistance and disaster relief becomes necessary.

If Madagascar seeks India’s assistance, New Delhi could possibly conceive many ways of helping. It could deploy a suitable heavy airlift aircraft of the air force, such as the C 130J, C 17 or the IL 76, with a plane load of relief material to be handed over to Malagasy authorities. It could also despatch Naval and coast guard ships to transport relief material to Madagascar, in a redux of the help rendered to Mozambique, after Cyclone IDAI in March last year. It could also consider flying out a cargo plane of Air India, with special equipment of National Disaster Response Force (NDRF). New Delhi can also explore the possibility of extending medical and veterinary support to prevent epidemics and spread of water-borne diseases. In rural Madagascar, Zebu cattle are the main source of sustenance for communities and mass cattle deaths due to drowning has created a need for addressing the veterinary distress. Clearly, as the worst goes behind, Madagascar will need a variety of assistance from basics such as medicines and clothes, replenishment of foodgrain stocks to reconstruction of schools and houses. India has an opportunity to walk the talk of being the ‘net security provider’ in the Indian Ocean Region by ensuring that its benign outreach extends to Madagascar in its time of need.

The regions affected by the storm that originated in the Mozambique Channel do not have any railway network and connectivity by air is poor. The ports of Mahajanga and Antisiranana offer lifelines of logistical connectivity to the inundated districts, from the sea. The Ivato International Airport near the capital, Antananarivo, offers air connections to many countries in eastern and southern Africa and the Western Indian Ocean.

Madagascar is part of the group called ‘Vanilla Islands’, which have in recent times assumed an important place in Delhi’s visualisation of the Indian Ocean as an inter-connected strategic space. Along with Mauritius, Seychelles, Comoros and Reunion, Madagascar forms the Francophone sub-region of the Indian Ocean, with historical and cultural ties to the Indian sub-continent dating to the colonial period. It helps that Madagascar and India share common membership of the Indian Ocean Regional Association (IORA) and Indian Ocean Naval Symposium (IONS). Antananarivo’s desire to extend a hand of friendship is slowly being noticed in the evolving Indian discourse, which is yet to fully come to terms with expectations of its extended maritime neighbourhood. The humanitarian tragedy in north Madagascar demands that the hand extended across the Indian Ocean is grasped and clasped in a firm grip of reassurance by New Delhi.