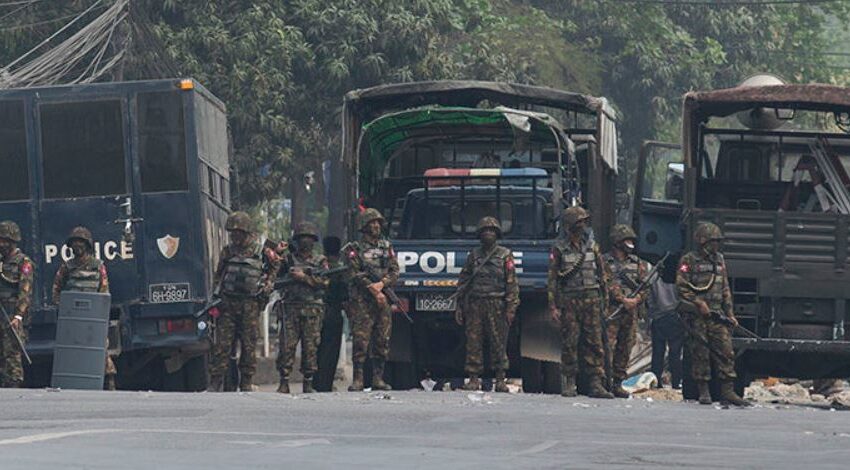 Myanmar is likely to see more bloodshed as security forces on the ground have been instructed to wipe out anti-regime protesters wherever they encounter them, according to internal memos issued by the top military command in the country’s capital Naypyitaw and whose contents were divulged to The Irrawaddy.

“You must annihilate them when you face them,” reads an instruction dated April 11, because “rioters [the military’s euphemism for anti-regime protesters] have gone from peaceful demonstration to the level of armed conflict.”

“Officers at all levels have to follow these instructions strictly,” it adds.

The order amounted to a retroactive endorsement of the massacre of 82 people just two days earlier in Bago, a city north of Yangon, in which soldiers and police sprayed protesters with live rounds and used rifle grenades to destroy roadblocks fortified with sandbags.

Two days later, on April 14, another memo was distributed.

It reads, “All the emergency security forces must be weaponized fully and systematically” as “riots may extend to your control area,” citing ongoing protests in “every township in Sagaing, Mandalay, Yangon and Bago regions and in Mon State.”

Since the coup on February 1, the leaders of Myanmar’s military (or Tatmadaw) have been roundly condemned inside and outside the country for committing atrocities against their own citizens. Coup leader Senior General Min Aung Hlaing has been dubbed “murderer-in-chief” by many people online, as his troops have killed more than 700 people so far.

The regime claims its use of force against protesters is justified to stop what it has referred to as “rioting”. It has used some protesters’ sporadic use of Molotov cocktails and air guns to portray the protesters as being the instigators of the violence. While the regime’s brutal repression has prompted some protesters to take up crude weapons such as homemade firebombs or rudimentary hunting rifles, the protests across the country have been largely peaceful.

Most of the civilian deaths so far took place prior to the “annihilate them” order. Given the number of deaths that occurred before the military command decided a shoot-to-kill “instruction” was necessary, it seems many more can be expected in the days ahead, now that the regime has given its already-trigger-happy troops a green light to embark on a killing spree.

With the “rioters” keeping up their protests, Myanmar seems likely to descend into further bloodshed.

It has also been learned that since February, the Myanmar military has been recalling battle-hardened commanders to the cities from remote battlefields to quell the peaceful protests.

Vice Senior General Soe Win along with hardline regional commanders and Lieutenant General Than Hlaing, the deputy home affairs minister, have been playing key roles in the serious rights violations committed during the Tatmadaw’s violent suppression of protesters and resistance forces. Both men are now on EU and US sanctions lists.

Despite resorting to violence and heavy-handed measures to control the anti-coup protests, the regime has been unable to restore law and order. Its attempted coup has not succeeded yet. At the same time, it has been struggling to maintain unity among its ranks.

The Irrawaddy has learned that top leaders, motivated by a mixture of deeply entrenched economic interests, a desire for political power and a misplaced sense of patriotism, are feeding rank-and-file soldiers and their families a steady diet of intimidation and propaganda, using psychological warfare tactics to keep them in line and hold the institution together.

To ensure military officers and their families don’t waver, the military on April 16 issued a warning to its command and field units that “foreign as well as domestic media are criticizing economic, political, social, religious and human rights issues of our government”.

It then instructed “all responsible persons at all level of forces to prohibit troops and families from listening to the media and explain to them at least twice a week that such broadcasts are lies.”

Long before the order was issued, senior commanders had already banned mid-ranking officers from using Facebook, the country’s most popular social media platform. The result has been to isolate them from the outside world and daily events in Myanmar. In effect, the Tatmadaw has become their entire world.

On April 17, the military’s high command instructed all units “not to allow strangers to come into the military camps or surrounding areas.”

In the ethnic states, in an “opinion” distributed on April 12, the senior command told armed forces and regional commands to be aware that “ceasefire armed groups are not officially organized by the State” and emphasized that the Myanmar military “is the only legal armed force” and “has to work for democracy and development with full strength.”

It further stated that the military “really wants peace and its main role is defending the country.”

The message ends with the exhortation that “the above opinion must be explained to all the troops”.