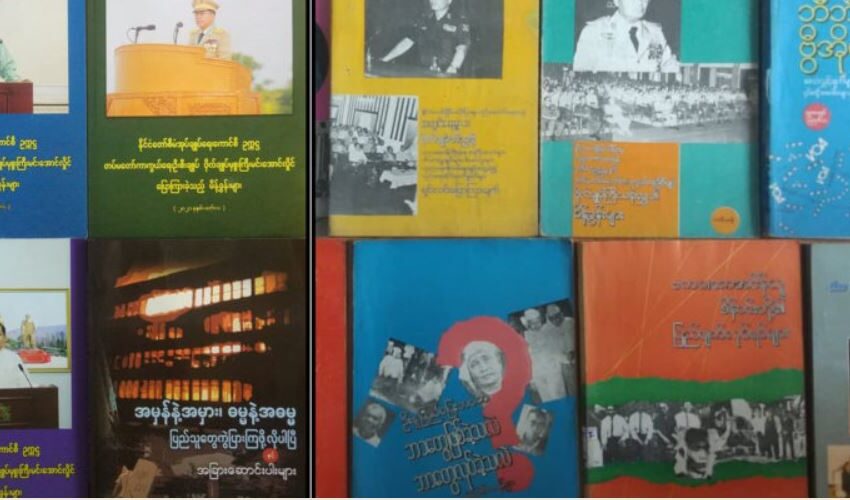 Some two months after the military takeover in February, the junta-controlled Ministry of Information started publishing books that denounced the anti-regime movement and praised the junta’s State Administrative Council.

Since the coup by late military dictator General Ne Win in 1962, all the information ministers, including the current minister U Chit Naing, have been ex-military officers, except under the National League for Democracy (NLD) government when the minister was U Pe Myint, a writer.

Therefore, support for military rule has been complete and ministers have viewed calls for democracy as rebellion.

The junta-controlled ministry has already published three books of coup leader Senior General Min Aung Hlaing’s speeches. The books are a collection of the military chief’s public addresses, speeches at the meetings with regime staff and military personnel and on national days to ethnic minorities in Myanmar’s states.

The books do not mention the junta’s killing of over 800 civilians who opposed military rule and the upheaval caused by the coup. Instead, they repeatedly justify the coup, claiming the military had to take over because the NLD rigged the 2020 vote.

The prefaces of the books blame the NLD for the coup. They say: “Although Myanmar’s democracy foundation shaped by the Tatmadaw [Myanmar’s military] since 1988 is making certain progress, the democratic journey is delayed by voter-list errors and poor transparency in the 2020 election and the failure to handle the Tatmadaw’s statements on the election.”

Another book, “It is Time for People to Differentiate Between Right and Wrong, Justice and Injustice” features more than 90 articles, mostly published in junta-controlled daily newspapers Myanma Alinn and Kyemon.

The articles argue the military would not have intervened if the election had been fair. Satirically calling the anti-regime movement the “revolution to bring back vote-cheaters”, the articles blame social influencers for instigating the protests, saying people died and were arrested because of them.

The NLD, the elected lawmakers from the 2020 general election who still oppose the junta, the civil disobedience movement and pro-democracy protests, are completely in the wrong, argue the articles.

Myanma Alinn and Kyemon announced that other books are on the way.

After the pro-democracy uprising in 1988, the military regime of the time did the same thing.

The junta’s governing bodies, the State Law and Order Restoration Council (SLORC) and the State Peace and Development Council, published hundreds of books, including the collected speeches of dictators, Saw Maung and Than Swe, books praising the Tatmadaw’s history, books of newspaper articles blaming the pro-democracy movement, a series of books of military press conferences accusing the NLD of being controlled by the Communist Party of Burma, books responding to the allegations broadcast by the BBC and Voice of America, criticizing the NLD, Daw Aung San Suu Kyi, former prime minister U Nu, the parallel government in exile and ethnic armed groups.

In his autography, NLD leader U Win Htein, who has been detained since the coup, wrote: “The SLORC has published many books. I assume it intends to condemn the 1988 pro-democracy uprising. For political prisoners like us, we couldn’t help gnashing our teeth whenever we read those books. They were trying to distort history.”

The dictators’ many books ended up at the secondhand book market on Pansondan Street in Yangon, available for tiny amounts.

The books recently published to praise Min Aung Hlaing and his regime are likely to follow a similar path.