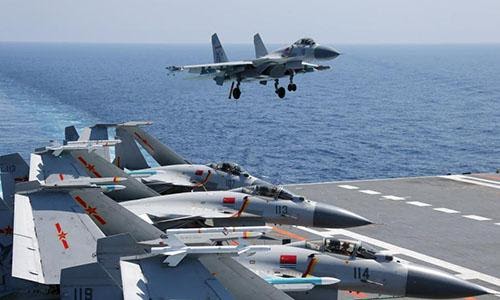 A J-15 fighter jet prepares to land on the flight deck PLA Navy’s aircraft carrier Liaoning in May this year. (Photo: eng.chinamil.com.cn)

SYDNEY: In the chronology of naval heritage, the United States Navy is a relative youngster, having grown out of the Continental Navy founded at the very beginning of the Revolutionary War in 1775. In the United Kingdom, the British Navy has been a “royal” instrument of the monarchy since 1660. The Indian Navy is older than both, tracing its roots all the way back to the foundation of the Bombay Marine in 1612.

But in China, a country where the proclamation of the People’s Republic turned 1949 into Year Zero for many institutions, naval traditions are of relatively recent vintage. China’s People’s Liberation Army Navy, as the awkward name suggests, grew organically out of the Communist Party’s pre-1949 guerilla army. It claims an official foundation date of April 23, 1949 but is only now emerging as an equal branch of China’s armed forces.

Key to the PLA Navy’s ability to act autonomously without support from land-based aircraft is its new aircraft carriers. China’s first aircraft carrier, Liaoning, was commissioned in 2012, though without any combat aircraft. It had a bizarre history, beginning life as the hull of the Soviet cruiser Riga in a Ukrainian shipyard in 1985. Never completed, the half-built ship was bought (along with its technical drawings) from post-Soviet Ukraine in 1998, supposedly for use as a floating casino in Macao.

Although Liaoning does regularly sail back and forth between the South and East China Seas, it is probably best viewed as a training ship, not a potential combatant. It is designed to carry up to 26 fourth-generation Shenyang J-15 fighters, but these can only take off from the carrier’s front ski-jump without full armaments, and the ship cannot accommodate planes taking off and landing at the same time. Liaoning also cannot accommodate cargo aircraft, meaning that it cannot easily be resupplied while under way. In any case, the carrier has a conventional steam turbine power plant, limiting its time at sea.

On December 17, 2019, China officially commissioned its second aircraft carrier, Shandong. It is based on the Soviet design of Liaoning, but upgraded and expanded, with a design capacity of 36 fighters plus various support aircraft. Like Liaoning, it uses a ski-jump launch system, which limits the weight of the aircraft it can launch, and a stripped-bare J-15 is the only operational fighter that can be deployed on the ship. It is widely rumoured, however, that China has only about 50 J-15s in its entire arsenal— or even as few as 20—which means that it can’t equip Shandong and Liaoning at the same time.

Even though it hasn’t yet worked through the problems facing its naval air wing, China seems to be pushing ahead with the construction of its next-generation successors to Shandong and Liaoning, sometimes called “Type 002” but more often “Type 003”. The potential specifications and delivery dates are still a matter of speculation; it is not even known whether the new carriers will feature convention or nuclear power. Only one thing seems certain: any new Chinese carriers will lack effective, purpose-built combat aircraft until at least the 2030s. China is trying to develop a fifth-generation carrier-launched stealth fighter to match the US F-35 but it doesn’t even have a prototype in the air.

Put the pieces together and China may launch its first modern, nuclear-powered, catapult-launch aircraft carrier sometime in the 2020s (or it may not), and it may have carrier-launched combat aircraft with air-to-air refueling capabilities sometimes in the 2030s (or it may not). Not only does China face serious technological hurdles (including, especially, the development of high-performance jet engines), but increasingly it also faces budgetary constraints. Building, equipping, and operating an aircraft carrier taskforce is the greatest challenge a navy can tackle. It is not at all clear that China can spare the money for such a military luxury.

As it currently stands, China’s aircraft carrier program—and the blue water navy of which it forms the centerpiece—represents little more than an extraordinarily expensive prestige project. Instead of projecting power deep into the ocean, China’s carriers themselves require the support and protection of shore-based aircraft. That may change in the 2030s, by which point China may be able to develop the technologies and integrate the systems that make modern naval aviation an effective military capability. Until then, China’s aircraft carriers are more important for public relations than for any meaningful naval operations.

(Salvatore Babones is an associate professor at the University of Sydney. Views expressed in this article are personal.)