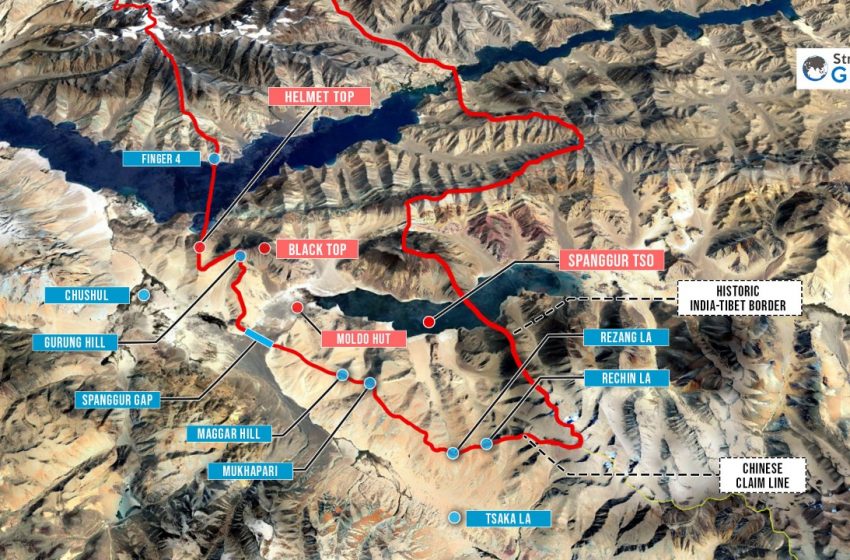 NEW DELHI: India and China may have decided to continue talks to resolve the standoff on the Line of Actual Control (LAC) in Ladakh after Monday’s inconclusive meeting at the Chushul-Moldo border point but it is now increasingly clear that India’s tactical military move along the Kailash range of mountains on August 29-30 has checkmated China and negated much of its early mover advantage in eastern Ladakh.

The PLA’s frustration at being outmanoeuvred was evident during Monday’s talks. According to multiple sources, the Chinese delegation leader constantly kept demanding that the disengagement and de-escalation process should begin by India withdrawing from the heights it has occupied on the Kailash mountain range south of Pangong Tso, a proposition that India rejected outright since all peaks—from Gurung Hill to Rechin La—that Indian troops have occupied in the Chushul sector are on the Indian side of the LAC.

The Indian delegation, led by Lt Gen Harinder Singh and his designated successor Lt Gen PGK Menon, stuck to India’s pre-determined stand that the ‘first in, first out’ principle should apply for the three-step process (disengage, de-escalate and de-induct) that must kick in for any meaningful status quo ante along the LAC. In other words, India has made it clear that China must start the drawdown of large quantum of forces it has amassed on the eastern Ladakh frontier since it was the PLA that initiated the standoff in early May, withdraw from Finger 4-Finger 8 area and pull back further some points along Galwan, PP-15 and PP17A.

According to an Indian Army assessment, China’s insistence on focusing on the Chushul sector stems from the fact that India’s counter move in occupying the heights in a swift operation on August 29-30 and then consolidating its positions with deployment of armour and artillery has given India a long-term strategic advantage and permanently changed the long-standing status quo. As a military officer explained: “India had always refrained from occupying these heights post-1962 lest the deployment provoked the Chinese. Even in the last phase of the 1962 war, the Indian deployment was at the base of these mountains. And although the Charlie Company of 13 Kumaon fought to the last man in the battle of Rezang La, they stood no chance against a massive Chinese ingress from these heights and the Spanggur gap in 1962. The operation on August 29-30 has, however, altered the equation forever since any side that holds the heights has a disproportionate advantage against any attacker.”

In effect, India has now foreclosed Chinese plans to launch an armoured offensive through the Spanggur gap—a two km wide opening between Gurung Hill and Magar hill to threaten the Chushul garrison and other Indian positions. In addition, the Chinese garrison at Moldo is now in the clear line of sight of the Indian forces perched on the heights. Of course, India will have to build permanent defences and basic infrastructure to allow prolonged deployment of troops at altitudes upwards of 17,000-18000 feet.

By contrast, none of the Chinese intrusions on the north bank of Pangong Tso or attempted ingress in Galwan has such a massive advantage. While the Chinese presence in the area between Finger 4 and Finger 8 on the north bank of Pangong Tso has occupied much of the mind space in popular media, military planners point out that India’s counter move in occupying higher ground above the Chinese presence along the Finger 4 ridgeline on August 31 has negated whatever advantage the Chinese had perceived to have gained since May when the standoff began. In Galwan too, the room for manoeuvre is limited since the valley is narrow and any movement by the Chinese can be countered by appropriate Indian deployment on the surrounding heights.

In any case, after surprising the Indian army with its swift build up and pivot towards the LAC from its usual exercise area in Aksai Chin, PLA is now faced with mirror deployment from the Indian side. In the mountains, as veterans remind us time and again, an attacking army needs at least nine to 12 times the defenders’ force to gain any decisive edge even in the time of standoff weapons and missiles. “The mountains swallow troops and infantry is indispensable in this terrain. The Chinese have overreached themselves, not taking into account India’s decisive and swift response,” Lt Gen Sanjay Kulkarni, a veteran of mountain warfare told StratNews Golbal. So the Chinese plans have been blunted by using a combination of swift response and tactical surprise by the Indian Army.

However, the army is wary of the situation in the Depsang plains further north of Galwan where the Chinese have recreated a friction point, blocking the normal patrolling pattern followed by the Indian forces. While the Sub-sector North (SSN) under which Depsang plains fall, has been reinforced by India with the induction of a brigade since 2013, the faceoff between Indian and Chinese troops at Y junction is a frequent occurrence (much before the current, larger standoff began) and is being treated as a separate affair by both sides as this report makes it clear (Read More: https://indianexpress.com/article/india/ladakh-china-lac-no-ground-lost-in-depsang-but-india-hasnt-accessed-large-parts-for-15-years-6599063/). Even in 2013, former Special Director of Intelligence Bureau, RN Ravi (now Governor of Nagaland) had pointed out that the Chinese had ingressed deep into Indian territory in Depsang (Read More: https://www.rediff.com/news/slide-show/slide-show-1-china-intrusion-government-is-misleading-people/20130513.htm#4).

With no convergence on what the two armies want, the 14-hour talks—sixth such meeting between Corps Commanders since May—ended in a stalemate except for one major point of agreement that both sides must continue to talk. More importantly, the two sides issued a joint statement, a rarity in this series of confabulations.

As the joint statement noted: “The two sides had candid and in-depth exchanges of views on stabilizing the situation along the LAC in the India-China border areas. They agreed to earnestly implement the important consensus reached by the leaders of the two countries, strengthen communication on the ground, avoid misunderstandings and misjudgments, stop sending more troops to the frontline, refrain from unilaterally changing the situation on the ground, and avoid taking any actions that may complicate the situation. The two sides also agreed to hold the 7th round of Military Commander-Level Meeting as soon as possible…” There is no clarity on when the next round of talks will take place, but it is now clear that India has forced a stalemate along the LAC by bringing the Chushul sector heights under its firm control.

Meanwhile, India has undertaken extensive preparations to allow large Indian deployment through the harsh Ladakh winter. All necessary logistics support has been put in place even as indications are that the region may witness an early onset of winter this year. Some assessments say India is racing against time to ensure essential dry rations, ammunition, heavy weapons platforms and fuel for additional troops inducted in the 14 Corps zone are in place before October 15, almost a fortnight before winter normally sets in in those high-altitude areas.